The USA has never lost a group match in the history of the CONCACAF Gold Cup. That record was severely tested by Haiti this weekend, when only a brilliant Stuart Holden strike in injury time saved the pre-tournament favourites from an embarrassing defeat. Highlights of the 2-2 draw below:

Despite the draw, the Haitians still did enough in the prelim group stage to progress to the quarter finals, along with the States. Haiti face Canada in the last eight, while the US tackle a tricky opponent in Jamaica. Both matches take place in Philadelphia next Saturday.
Pub quiz ammo: Holden was born in Aberdeen and signed for Sunderland in 2005. But he never played a game for the Mackems, after being beaten up in a taxi queue in Newcastle. The attack left him with a badly fractured eye socket (see photo below). 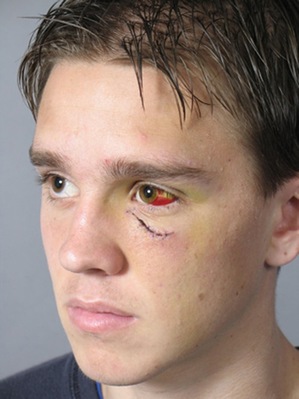 I sincerely hope Holden returns to play in England one day, if only to wipe out the ugly memory of his brief time in this country.
Follow Stuart on Twitter (