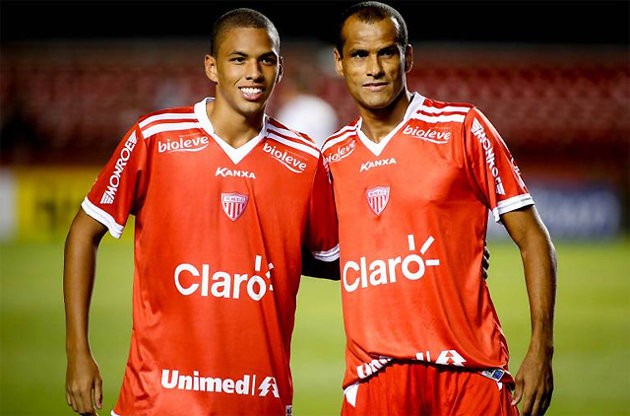 He’s retired more times than Frank Sinatra over the past few years but Rivaldo, at the grand old age of 43, is back in business and playing for Brazilian second tier side Mogi Mirim – the Sao Paulo-based club he began his professional career with and is currently the honorary president of.

Joining Rivaldo at Mogi Mirim is the 20-year-old fruit of his loins, Rivaldinho, with the father-son duo making a little bit of history on Tuesday evening by each helping themselves to a goal in a 3-1 win over Macae in Serie B.

As per Reuters‘ match report, Rivaldo had a hand in all three goals before departing the field after 50 minutes, setting up his son to head home the opening goal with just three minutes played.

The ex-Barcelona veteran then added a second goal from the penalty spot 15 minutes later before playing a part in Junior’s cake-icer shortly before half-time.

The victory over Macae marked Rivaldo’s second game since he decided to reverse his 15-month-long retirement last week in order to play in Mogi Mirim’s 2-1 win over Nautico.

Fair play to the geriatric old codger. Long may he reign!