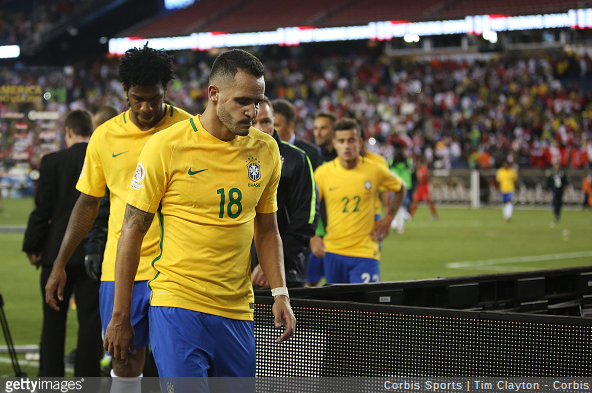 Brazil’s much-maligned 2016 vintage suffered the ignominy of being jettisoned at the group stage of the Copa America for the first time in 30 years after going down 1-0 against Peru last night.

In fairness, while Brazil’s performance was largely underwhelming, the defeat did come about in extremely controversial circumstances – Raul Ruidiaz quite clearly bundling the only goal of the game over the line with his hand/arm/thing in the 79th minute.

The officials duly took three minutes to deliberate over their decision before ruling that Ruidiaz’s finish was perfectly legal.

Speaking after the game, the Peruvian striker reportedly claimed: “It was a quick play, it hit me in the thigh”.

The result left Brazil in third place in Group B, with Peru and Ecuador qualifying for the knock-out phases in their stead. They were also the only team to concede a goal against tiny wee Haiti, though it did come in a 7-1 thrashing.

Given the overly negative, flaccid nature of the Selecao’s general approach, most of the post-match ire immediately and inevitably focused on their perennially unloveable coach Dunga, who defiantly stated that he “fears nothing but death” when asked if he was worried about being sent packing for the second time.

Dunga: "I only fear death." In response to asking if he fears for his job #Brazil #CopaAmerica

What a marvellous decision to re-appoint him in the first place, eh?