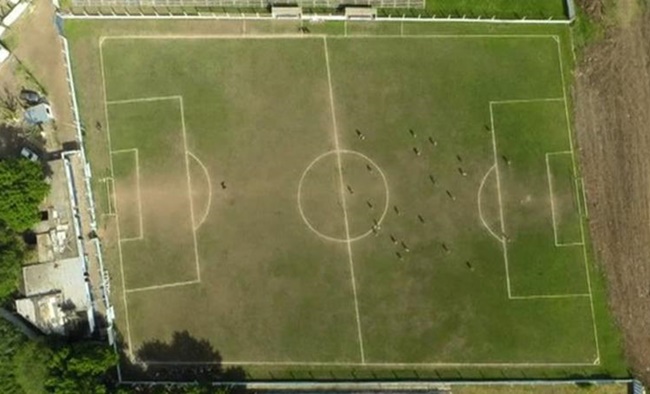 Despite it being deemed perfectly fit for purpose for the last three decades, an Argentinian fifth-tier club have been ordered to correct their famously wonky home pitch.

It would appear that everybody involved at Club Social Deportivo Liniers was perfectly aware that their pitch was cock-eyed, with club president Marcelo Gomez claiming that the suits at the Argentine Football Association (AFA) only cottoned on when they happened across aerial images of the ground on Google Maps recently.

Turns out Liniers’ pitch is anything but linear. Indeed, now the club have been threatened with ground closure if the pitch isn’t recalibrated by the 15th of December to come into line with FIFA regulations.

Liniers club vice-president Miguel Narvaez explained (via BBC Sport) how the pitch came to be so irregular:

This is a story that began 30 years ago. In 1984-85, a couple of old visionaries bought seven and a half hectares.

They began the works, they laid the pitch, and at that time there were no lasers. They pulled string in line and it seems they did it a bit crooked.

Now we are now working to fix that.

Team manager Cesar Aguirre failed to see what all the fuss, insisting that his players have no issues with the slightly odd dimensions.

We’ve played here for so many years that we’ve adapted to its shape.

Maybe it’s the opposition team who need a couple of minutes to get used to the field, but tactically it does not change much.

And with that, pernickety bureaucracy claims yet another victim.