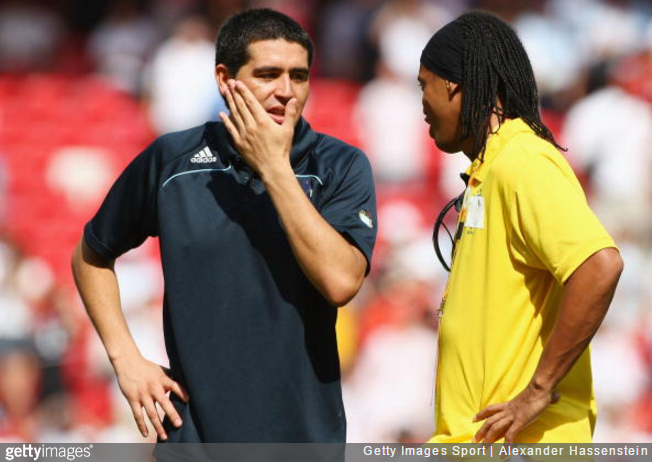 It’s being reported that Ronaldinho and Juan Roman Riquelme are considering coming out of retirement in order lend a helping hand to Chapecoense, the Brazilian club that lost 19 senior players in a tragic plane crash on Tuesday morning.

The Sun claim to have heard tell that both Ronaldinho and Riquelme have offered to muck in and help make up the numbers for Chapecoense, who have been asked by the Brazilian Football Confederation, albeit in a sensitive manner, to fulfil their next competitive fixture against Atletico Mineiro.

The game, scheduled for 11th December, would be the final game of the season for both clubs.

Juan Roman Riquelme and Ronaldinho have reportedly offered to play for Chapecoense. pic.twitter.com/h7oLhsKr48

Details are notably vague, but the tabloid – citing the Tweet above – reckon that the pair are now seriously mulling over the prospect of turning out for Chapo on the back of a “huge fan campaign” that began as soon as both players individually expressed their sympathies for the victims of the disaster on social media.

Whether or not there’s any real truth in the rumours is unclear, so it’s probably best we all sit tight for the time being.

UPDATE: Any plans involving Ronaldinho and Riquelme may well be scuppered at source with the breaking news that Atletico Miniero have offered to forfeit their game against Chapecoense…

As before, we will just have to wait and see.