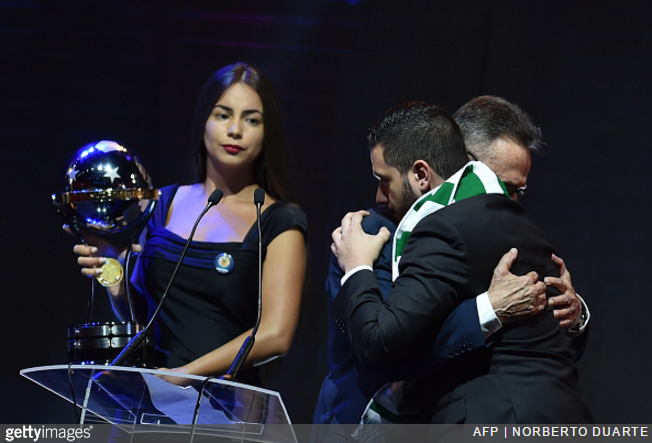 Nigh-on four weeks after the tragic plane crash that claimed the lives of almost all of the club’s players and many of their staff members, Chapocoense were formally bestowed with the 2016 Copa Sudamericana at an emotional ceremony in Paraguay last night.

After much deliberation, CONMEBOL decided to award the Copa Sudamericana title to Chapecoense, who were flying into Medellin for the first leg of the final against Colombian opponents Atletico Nacional when their plane went down.

As such, the South American football federation had Chape club president Plinio David de nes Filho take to the stage and formally lift the trophy during the 2017 Copa Libertadores draw gala.

While doing so, Plinio David shared the stage with Daniel Jimenez, a representative of Atletico Nacional…

Speaking from the rostrum on the stage, Chape’s president extended his gratitude to the man standing next to him:

I would like to thank everyone, all the nations.

But let me, in a very special way, a very tender and grateful way, on behalf of our club, Chape, to share the trophy we just received with the one who gave us this possibility, thanks to their gesture of humanity and respect, their dignity and their demonstration of kindness.

If you’ll excuse us, Pies have suddenly got something in our eye.