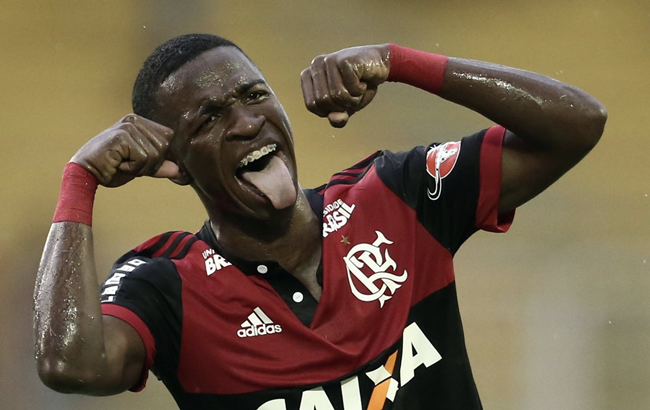 Botafogo have thrown a wobbler and blocked Flamengo from using their stadium for an upcoming match after taking umbrage at Vinicius Junior and the goal celebration he performed after scoring against them at the weekend.

The two sides met in the Campeonato Carioca on Saturday night, with Flamengo winning 3-1 thanks to a 94th-minute cake-icer from Vinicius Junior.

However, the 17-year-old striker (who signed for Real Madrid in a €45million last year with just two senior games under his belt) celebrated his goal by goading the travelling Botafogo fans with a ‘crybaby’ gesture.

The gesture is regularly used by Flamengo fans to antagonise rival Botafogo supporters and is an enduring reference to the time their entire team appeared on television in the aftermath of a defeat to Fla back in 2008 and openly wept about poor refereeing decisions.

Anyway, Botafogo were so upset at Vinicius Junior’s mockery that they have now refused to allow Flamengo to use their Estadio Nilton Santos for the latter’s Guanabara Cup final fixture against Boavista this Sunday.

The final was originally intended to be played at the Maracana stadium in Rio de Janeiro, but the arena is being used to stage a concert instead.

In an official statement, Botafogo whined (via Globo Esporte):

The decision was taken only in light of the goal celebration of the opponent, demonstrating disrespect to the Botafogo institution.

Petty, and gloriously so.