A fan of Uruguayan club Nacional was so desperate to watch his side play Fluminense in the Copa Sudamericana that he made a gargantuan 1,500-mile pilgrimage across the Brazilian border to do so.

Richard Fernandez left his home near Montevideo with just $100 in his pocket and spent the next 22 days hitchhiking in the general direction of the Estadio Nilton Santos in Rio de Janeiro. 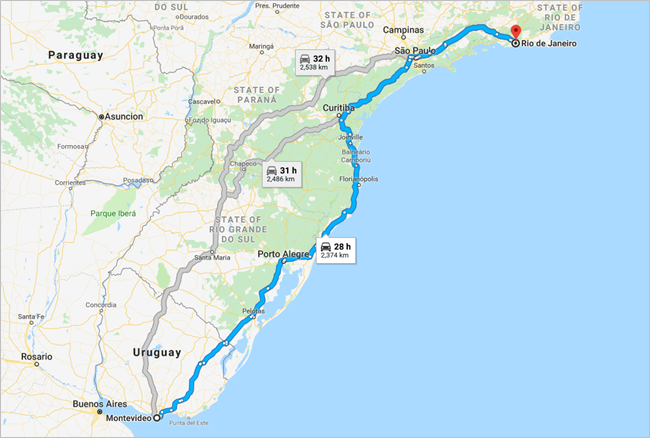 According to Ovacion, as well as the sheer scale of the journey, Fernandez also had to contend with a gang of robbers who targeted the truck driver he was tagging along with.

The robbers told him (Fernandez) that he was going to be ok because he was Uruguayan. They sat him down in a room with a table full of cocaine, beer, and weed, where they invited him to consume whatever he wanted.

All of this while they were emptying the trucks which were transporting car seats. Some of the gang members were as young as 11-12 years old and were armed. They ended up taking the $60 he had left.

The intrepid supporter managed to scrape enough money together to buy a coach ticket to Rio, where he was able to meet with Nacional head coach Alexander Medina, who presented him with a complimentary ticket to the match.

Fernandez then spent time lounging around and drinking mate tea on Copacabana beach with the club’s goalkeeping coach before watching Nacional hammer out a 1-1 draw with Flu.

The two sides will now settle the tie back in Montevideo next week, but Fernandez has decided to stay put for the time being as he’s 100% confident Nacional will win the second leg and then be drawn against another Brazilian team in the next round.

The commitment to the cause is commendable, but this guy is clearly a nutter!