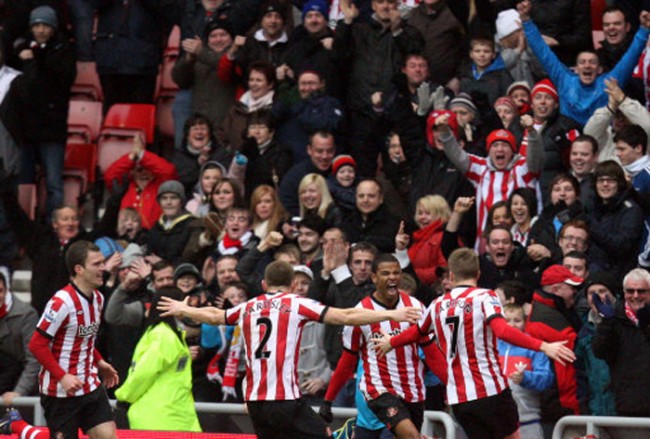 Frazier Campbell made a goalscoring return from injury at the Stadium of Light on Sunday, netting the Black Cats’ equaliser after 18 months out of action.  The former Manchester United man was a half-time substitute, as Martin O’Neill attempted to improve upon what had been a rather lacklustre first period by his charges.

Barry Robson was ‘Boro’s stand-out performer in this north-east derby, and it was the Scottish international who opened the scoring on just 16 minutes, unleashing a superb left-foot volley after Sunderland failed to adequately clear a corner. However, the home side were controversially denied an equaliser just before the break, when Craig Gardner was wrongly adjudged to have been in an offside position before he fired home. However, to be fair, he had handled the ball when controlling it in the first place.

With almost an hour played, goalscorer Robson did the old her0-to-zero metamorphosis, misplacing a pass when under pressure which left the superb James McClean in the clear to drive forward before deftly setting up Campbell, who directed the ball past Danny Coyne in the ‘Boro goal.

McClean then came close to winning the game late one, only to fire wide when presented with a decent opportunity to score.

So while Martin O’Neill’s unbeaten home record remains in tact, Tony Mowbray and co. will be confident of going one better against the Black Cats at the Riverside in the replay.