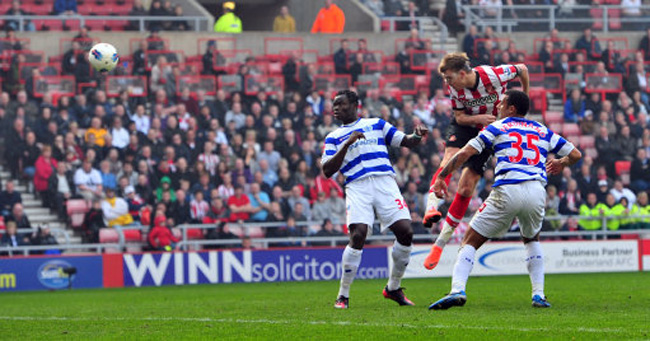 French striker Djibril Cissé is not having quite the type of impact at Loftus Road which boss Mark Hughes would have hoped for. Sent off for the second time in just five games for the west Londoners, this time after a dreadful challenge on Frazier Campbell, the former Sunderland man did his struggling side no favours at the Stadium of Light.

Irish international James McClean was in inspired form all afternoon, running with pace and power at the Rangers’ backline, and it was the wideman who would create the opening goal of the game, with Arsenal loanee Nicklas Bendtner heading home his centre just before half-time.

After the break Rangers came close to equalising courtesy of Cissé before the striker was shown his marching orders with over half an hour of the game remaining. Man of the match McClean then doubled the lead on 70 minutes with a tidy finish before Stephane Sessegnon made it three six minutes later.

Rangers did bag a consolation striker courtesy of a superb free-kick from Taye Taiwo but the damage was already done for the Londoners, who now find themselves third from bottom. Martin O’Neill’s Black Cats, on the other hand, move up to eighth.