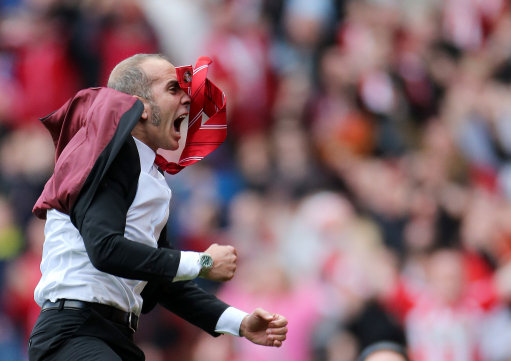 After coming in at the tail end of last season and just about keeping Sunderland in the Premier League, Paolo Di Canio has spent the summer ushering in a new era of professionalism at the club by ramping up the fitness work and banning all extra-curricular luxuries and potential distractions – clamping down on several of the cancers eating away at fooball’s moral fibre, like tomato sauce, singing and players drinking Coke with ice in.

“This is a complete revolution. It’s not just in the way we play, but in how we approach everything. It’s been difficult.

“We’ve focused on changing the whole dressing-room environment. Imagine if for years your habit is to use the phone when you’re having a massage on the bed, even one minute before going out to train? For 25 days I accepted this, because my first priority was to work on the field.

“However, I’ve said that from now if someone comes inside with a mobile phone, even in their bag, I’ll throw it in the North Sea. They’re banned.

“We need to have lectures about why we can’t have every day things like mayonnaise, ketchup and coke. They can cause chemical problems to the liver, to the stomach.

If you have ice with coke you can have indigestion. I know players who’ve had ice with their coke the night before a game and then couldn’t play.

“Even coffee can be a problem. You can have one when you get up, but not an hour before you go out training or playing. We give the players diet sheets to follow.”

Di Canio also went on to state that singing in the showers will also be forbidden under his strict new regime as it “disrupts concentration”.

Seriously, how long before he gets canned? Two, three months?