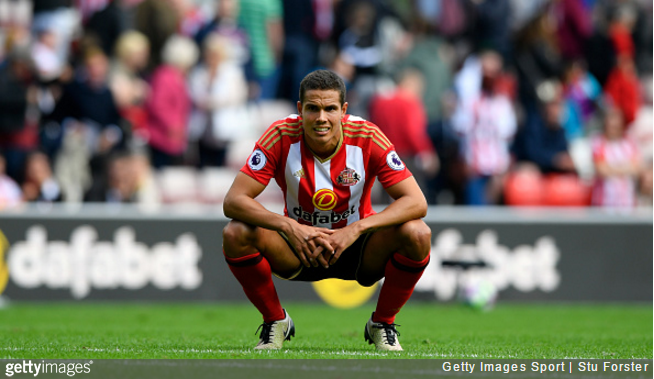 With Saturday afternoon’s 93rd-minute defeat against West Ham still smarting, Jack Rodwell bared his soul and admitted that Sunderland have gone “a bit backwards” since David Moyes took over at the start of the season.

He’s not wrong either. Under Sam Allardyce, the Black Cats preserved their Premier League status against the odds last season by ending with a run of one defeat in their final 11 games.

Since then, however, things have taken a turn for the despondent with the club still awaiting their first league win as they continue to prop up the rest of the table.

As if to double the misery, the loss to West Ham also saw Rodwell extend his truly risible record as a Sunderland player – the midfielder having never won a single game in which he’s started since first arriving at the Stadium of Light some 796 days ago.

That means Rodwell is now top of the table when it comes to Premier League players who took bloody yonks to register victories at a new club, eclipsing the barren runs of second place Darren Moore (Derby, 29 games) and ex-Tottenham jinx Gareth Bale (22 games) in third.

But that’s just the start of it.

In fact, all in all Rodwell has now gone for 1,241 days (that’s almost three-and-a-half years) since he won a league game in which he started.

It came while he was still playing for Everton in May of 2013, in case you were wondering.

Usually Pies are constitutionally against match-fixing, but we can’t help but feel it’d be super sporting if Sunderland’s next opponents (Arsenal, as it happens) could do Rodders a favour and let him taste victory for once.