Sunderland pulled off a dramatic comeback away to Bristol City on Saturday, with the Black Cats netting three second-half goals to secure a 3-3 draw.

However, after the hosts had gone 3-0 up within the first 40 minutes, Sunderland’s Twitter account was as despondent as the away fans who had made the 290 mile trip south.

Not long after Famara Diedhiou has netted his second of the game, the Black Cats’ social media team had had enough… 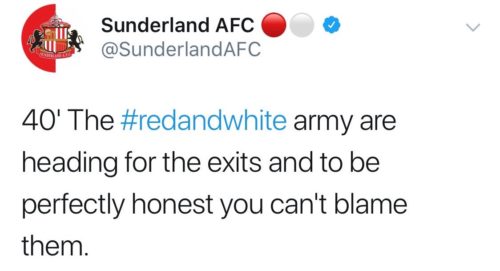 At least it was honest.

However, that Tweet was eventually deleted as the visitors pulled off an incredible late comeback, with Josh Brownhill’s own-goal getting the ball rolling for Sunderland before Aiden McGeady and then Marlon Pack, with another OG in injury-time, handed the Black Cats a share of the spoils.

Quite a turnaround for Chris Coleman’s Championship strugglers, both on the pitch and on Twitter!