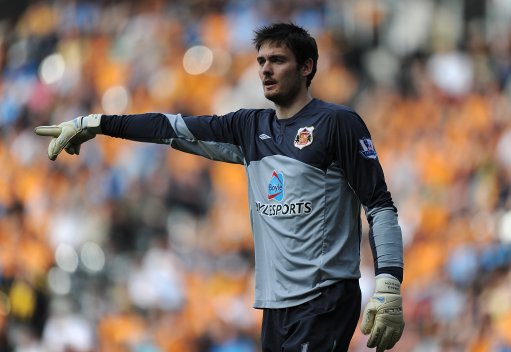 Sunderland ‘keeper Craig Gordon has declared himself ready to return to action after spending the best part of the previous calendar year out with a recurring fracture to his arm.

Gordon originally had metal plates inserted after breaking his arm in a challenge with Tottenham striker Jermain Defoe back in November of last year, and then duly broke it again during pre-season training after having the plates removed in July of this year.

The Scottish international is hoping to oust his deputy Simon Mignolet in time to make a first-team return against Manchester United this weekend, and also hopes to play a part in Scotland’s Euro 2012 qualifying games against the Czech Republic and Spain the following week;

“I am back in training and doing exactly what the other goalkeepers are doing. It is nice to be back in the group. My target is the Manchester United game. I could be available for the weekend.

I know I have to be sensible – I don’t want anything going wrong at this late stage. I just need to have a feel for the game again. I will not have to do too much on the fitness side – it is more about positional play and when to come for crosses.”