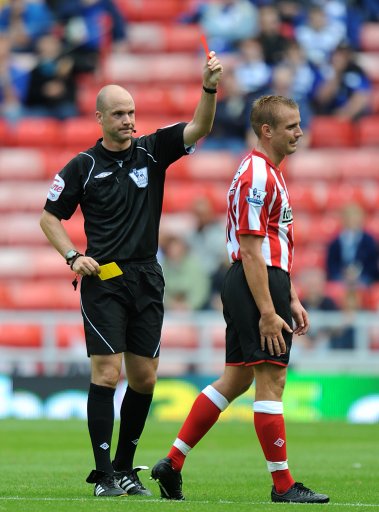 Sunderland’s combative midfielder Lee Cattermole  has apparently cultivated something of a persecution complex judging by his latest comments.

The 23-year-old hardman, who has picked up only 47 bookings and five red cards since 2005/06 in domestic football said: “I feel like they (referees) are out there for me at the minute. Maybe it’s my stupid mistakes in the past that have got me that reputation, so I can’t sit here and blame everyone else. I have to get rid of that reputation, but it’s so hard at the minute when I find myself getting a succession of soft yellow cards.”

“If you put every foul I’ve ever made up on the television, I think there’d be one tackle which was actually a bad one, ” he continued. “That was against Scott Parker

when I was playing for Wigan and I’ve spoken to him since to apologise about it. That’s the only bad tackle I’ve made in my career – all the rest have been genuine attempts to win the ball, not nasty attempts to hurt someone.”

In his last game against West Brom, Cattermole was subbed off by manager Steve Bruce , who was worried that the midfielder would eventually see red again after receiving a yellow.

“The tackle I got booked for wasn’t a foul, simple as that,” explained Cattermole “But it’s twice it’s happened now with Steven Reid. He’s six foot four and he rolls around like a girl, simple as that.”

Forgetting the inherent sexism in Cattermole’s comments about Reid, take a look (see video below) at a challenge by the harmless little chap on Luka Modric last season.

Along with the likes of Ryan Shawcross, Kevin Davies and Karl Henry, Cattermole is either a) one of those good old fashioned tough English players not afraid to get his hands dirty, or b) a dangerous thug. You decide.