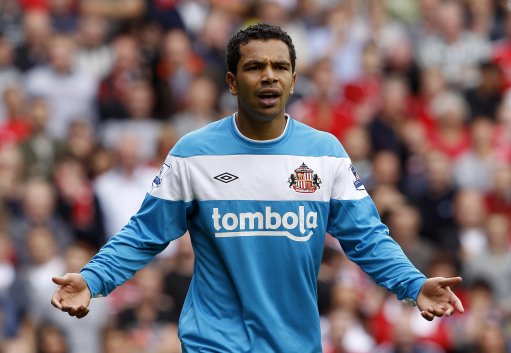 Not only do Premier League footballers have to watch their own behaviour, but they also have to hope that their family members behave themselves too. Just ask Wayne Rooney.

Well Rooney’s ex-United team-mate, Kieran Richardson, is the latest footballer to see his family in the ‘papers for the wrong reasons. According to The Sun (so it must be true), Kieran’s dad went ballistic while watching his other son, 14-year-old Tyler, play in an under-15s game in London recently.

Clyde Richardson initially threatened the ref after an offside decision went against his son’s team, Long Lane Tigers, saying to the official he would “put him on his arse”.

The referee then abandoned the game (for what reason, we are not told), which set off Père Richardson once again.

“When the ref called it off things kicked off,” a ‘source’ claimed. ” Clyde started smashing his chest against the ref’s and parents had to drag him off. It’s not the sort of thing boys of 13 and 14 should see.”

As witnessed on Sunday League pitches the length and breadth of the country, there’s nothing better for a child’s confidence than having his parents on the sidelines shouting abuse at everyone else present.