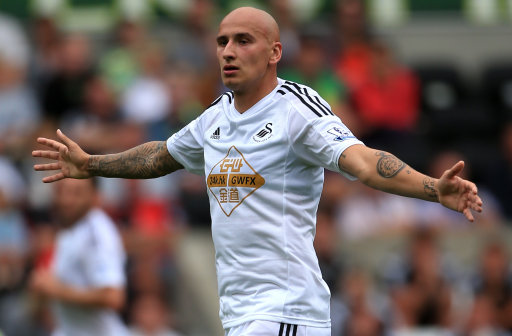 Massive doff of the proverbial cap is due to Jonjo Shelvey, who made a young fan’s dreams come true with a wonderful gesture last weekend.

Seven-year-old Swansea fan Harry Jacobs wrote to Shelvey via the club’s office and invited the midfielder along to his primary school in Muswell Hill to meet him and his friends.

Much like Shelvey, little Harry also suffers from Alopecia Totallis, a condition that led both he and his Swans hero to lose all of their hair at a young age.

“You are amazing and scored a goal from 47 yards into the top corner. So, so, so good.

“I know you play for Swansea. My name is Harry and I have Alopecia like you.

“Do you like [having Alopecia]? I think it is medium because I can’t get nits and don’t have to go to the hairdressers – which is good. I don’t really like it though.

“Can you come to my school please, but first to my house. I can take you to school then to meet my friends.”

Harry’s mother, Nic, also added at the bottom of the letter:

“Harry has developed Alopecia really rapidly. He is a mad footy fan and has got some comfort from the fact that you are a Premiership footballer who he can look up to and see that he can still achieve incredible things.

“I would really appreciate if you could write back to him.

“He is going through a really tough time at the moment and it would be a real boost for him to have a response from you.”

However, Shelvey didn’t just respond to the letter, oh no – in fact, he went one better than that; inviting Harry and his parents down to the Liberty Stadium for Swansea’s recent game against Southampton.

Shelvey then personally greeted Harry in order to hand over a full Swans kit and a ticket to watch the game from one of the stadium’s plush executive boxes.

Oh yeah, and he also informed Harry that he had been made an official match mascot and would be accompanying Shelvey out onto the pitch before kick-off.

Speaking after the game, Shelvey told the Swansea club website:

“I know what it was like for me growing up as a boy with Alopecia. It was quite tough for me with people calling me names and things.

“I felt for Harry when I got the letter and it was nice for me to share some of my experiences with him and to try and guide him along the right lines.

“The best bit though was seeing the look on his face walking out with the team.

“He said he had a great time – and that’s so special.”