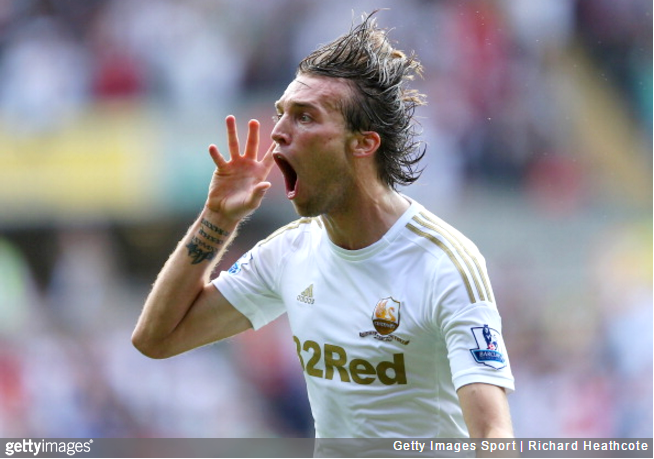 Michu returned from the wilderness to score two goals in the Copa del Rey on Thursday evening, almost 700 days (686 to be precise) since his last appearance in a professional game.

Back in 2012/13, Michu was one of the hottest properties in the Premier League having scored 22 goals in a prolific debut season for Swansea. He even forced his way into the Spain squad in October of 2013, starting in a World Cup qualifier against Belarus.

However, a long procession of injuries robbed him of his mojo. A loan stint at Napoli was blighted by knacks and niggles and by the time he was eventually released by Swansea in November 2015, he hadn’t played a competitive club game since October the previous year.

Three months after leaving the Swans, he joined UP Langreo in the Spanish fourth tier — a team coached by his older brother Hernan.

Having gradually regained some semblance of fitness down in the regional leagues, Michu earned himself a contract at his boyhood club, second division Real Oviedo, whom he joined in late August.

Last night the 30-year-old striker made his debut, miraculously coming through all 120 minutes of Oviedo’s cup clash against UCAM Murcia unscathed and scoring two goals in the process.

With Oviedo trailing 3-1 as the match ticked over into the last 10 minutes of normal time, Michu scored a brace of quick-fire goals (in the 83rd and 90th minute) to level things up and take the tie into extra time…

Sadly, Oviedo couldn’t hold on and Murcia ended up pipping things with a fourth and final goal in the 111th minute to book themselves a place in the third round.

Still, on a personal level, a huge well done to that man Michu for hauling himself back up by his haunches after two years of abject frustration and disappointment.