Bob Bradley has been sacked by Swansea City after the American manager’s short tenure at the Liberty Stadium had failed to kickstart the club’s season.

The former USA, Egypt and Le Havre boss became the first American manager in the Premier League when he succeeded Francesco Guidolin on October 3rd with Swansea teetering above the drop-zone by virtue of goal difference.

However, in his 11 games in charge, the 58-year-old saw his beleaguered side lose seven of their 11 games and ship 29 goals, leaving them in 19th place, four points from safety.

Swansea’s 4-1 defeat by West Ham on Boxing Day was the final straw for Swansea’s new owners Steve Kaplan and Jason Levien, who finally decided to chalk up the club’s second sacking of the season, with just 18 league games played. 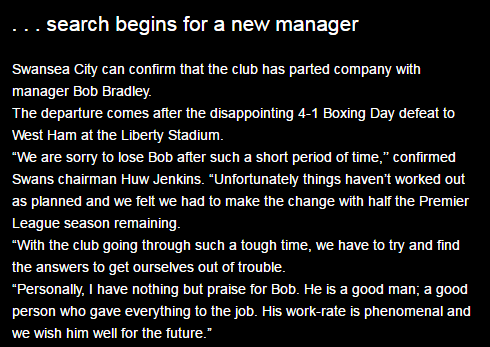 Welsh boss Chris Coleman, ex-Birmingham City manager Gary Rowett and Alan Pardew are all thought to be serious contenders for the vacant role.