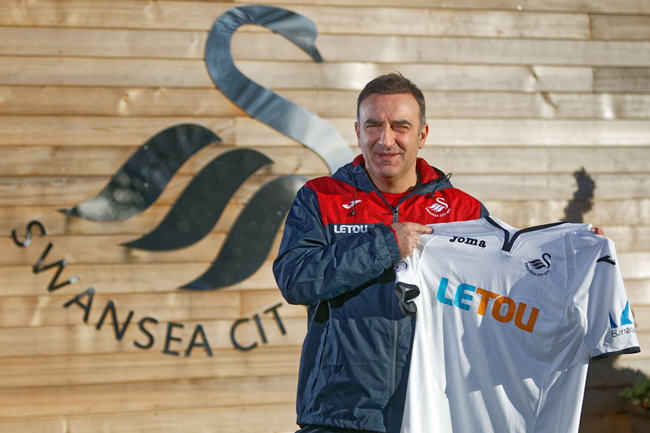 Straight out of the far end of the left field, Premier League rest-of-table-propper-uppers Swansea City have entrusted Carlos Carvalhal with the responsibility of delivering them from relegation this season.

Those not instantly familiar with the name might twig when we tell you Carvalhal was the coach recently sacked by Sheffield Wednesday after last weekend’s 2-1 defeat by Middlesbrough.

The 52-year-old Portuguese hauled The Owls into the play-offs twice in his first two seasons at Hillsborough but struggled to replicate the form this time out and was sacked on Christmas Eve with his side sitting 15th in the Championship pile.

Four days later, he signs on with the Swans until the end of the season (with an option for a further year)…

Oddly, the broadly successful two-and-a-half years he managed at Wednesday represents the longest managerial tenure Carvahal has mustered during a fairly fractious and scattered career, having coached 15 different clubs in 17 years since starting out at Espinho in 1998.

Put it this way, his CV hardly screams ‘solid footing for a Premier League relegation fight’ but there is still plenty of time for him to prove the doubters (including Pies) wrong.

However, what with Tony Pulis ending up at Boro and Carvalhal at the Liberty Stadium, we can’t help but feel that their application letters might have got mixed up in the hectic Christmas post.