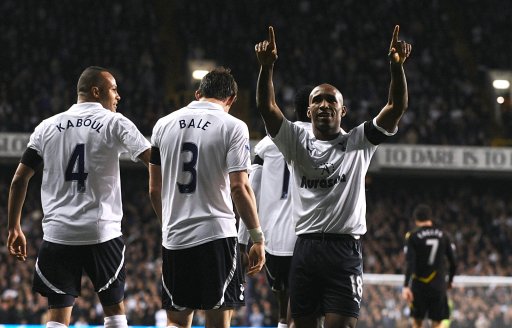 Harry Redknapp’s Lilywhites strolled home to yet another league victory as they consolidated their place in the top three in the league.

Gareth Bale, Aaron Lennon and Jermain Defoe were the goalscorers for the home side, who could have won by a far great margin. However, Trotters boss Owen Coyle will point to the bizarre sending-off of Gary Cahill as the turning point in yet another defeat for his Bolton side. With the score at 1-0 and 17 minutes on the clock, Cahill, who was arguably his side’s last man, brought down Scott Parker just inside the Bolton half. Despite having half a pitch between Parker and the Bolton goal, referee Stuart Atwell judged the foul as stopping a clear goal-scoring opportunity. A terrible decision that ended the visitors hopes of getting back into the game.

Bale, who celebrated his goal by showing the Bolton fans his left boot, which had ‘RIP Gary Speed’ stitched into it, was in superb form again on he left wing, adding an assist for Defoe’s goal to his own early strike.

Bolton don’t seem to be showing any signs of kickstarting their dismal season, while Tottenham’s superb form begs the question – are they now genuine title contenders?