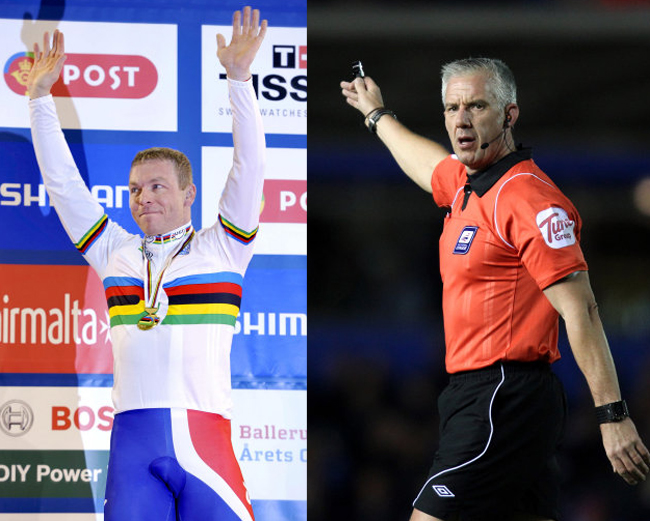 One of these men is a Premier League referee, the other a gold medal-winning Olympic cyclist – can you spot which is which? Let the Lycra be your guide…

In a story rather reminiscent (in a cyber kind of way) of that infamous paediatrician/paedophile mix-up some years back, irate Tottenham fans, angered at the referee’s performance in their 2-1 defeat against Stoke on Sunday have been taking to Twitter in their droves, but directing their (rather justified) ire at cycling legend Sir Chris Hoy rather than the guilty official, one Chris Foy. Spot the critical difference?

From @safunimam – “your refereeing is pathetic & disgracefull. U definetly need double glasses.”

From @chutneymutt – “Chris Hoy, not only are you a useless **** of a referee, you also support Stoke.”

Olympic gold-medal winner Hoy has taken it all rather well, Tweeting “Still getting some rather amusing grief from Spurs fans! On the plus side I’ve learned some new 4 letter words today. #FoyNotHoy.”

The lessons to be learned here are 1) do a bit of research before abusing someone on the web (at least know their name) and, 2) if you are a referee, steer well clear of Twitter.

And at least unlike that bizarre attack on a paediatrician’s house back in 2000, at least the abuse fired at Hoy was purely web-based.