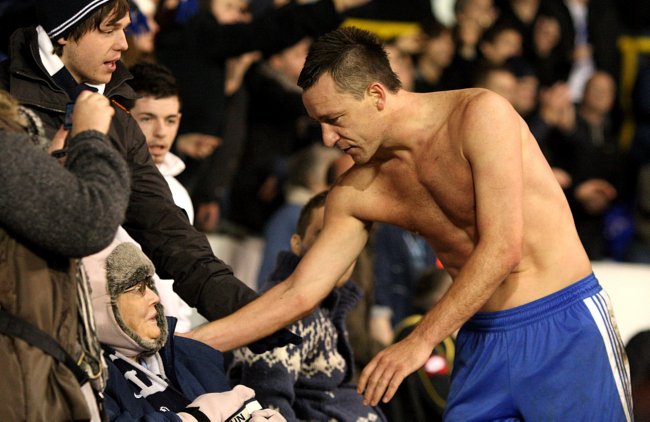 I watched the Tottenham-Chelsea game in the boozer last night so, praise be to Allah, there’s another drunken and completely verbatim match report heading your way…

◊ John Terry wearing WHITE boots. Racist.
◊ Can see Terry getting the winner tonight (thumping header from a corner/87th minute), then running back to position w/ chest puffed out + without celebrating
◊ Goal: 1-0 Spurs, 8th min, Adebayor – The back of Petr Cech’s mind is always on the back of Petr Cech’s mind these days.
◊ Adebayor’s going to be off before half-time at this rate.
◊ Goal: 1-1 Chelsea, 23rd min, Sturridge – Lovely cross from Ashley Cole and a finish I’d have comfortably skied from about 30cm. Handball? Nah.
◊ Ivanovic has Eva Carneiro supporting his weight while the male Chelsea physio massages cream into his thigh. Tough break.
◊ Players should have a silken hanky tucked down the back of their shorts. When an opponent tugs it out, the two shake hands in gentlemanly fashion and possession is handed over. Get rid of all these nasty yellow cards.
◊ Howard Webb looks like a policeman.
◊ Alex Ferguson must still get the odd titter from the Mikel deal. What a f**king lump.
◊ Bloody hell Lampard looks pissed off. Time to accept the ravages of time Frank.
◊ ‘Tis the night of the hamstring tweak – first Ivanovic, then Mikel, now VDV
◊ ‘Aurasma’ sounds like some kind of horrible bronchial illness.

◊ If this git puts Coldplay’s ‘Allar, Allar, Allardyce’ song on the bloody jukebox one more time while I’m trying to listen to Southgate, I’ll f**king brain him!
◊ 60-something-th minute, Sandro is playing. Who knew?
◊ Adebayor goal disallowed for offside. He was on (just), but possibly used bingo wing to slap it over the line.
◊ Pavlyuchenko been just as anonymous as VDV. A like-for-like swap.
◊ Brave, brave Sir Terry uses his chuff to stop last-minute goal going in. Fitting.
◊ Phweep! Finishes 1-1.