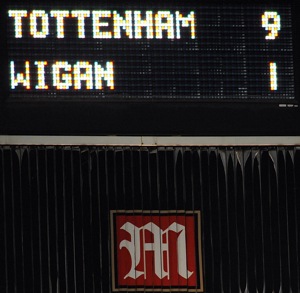 I thought Spurs would beat Wigan, by a goal or two. But, in the parlance of Alan ‘The Charmer’ Pardew, I didn’t think Spurs would ‘absolutely rape’ Wigan – and it wasn’t so many weeks ago that I had Jermain Defoe – who hit FIVE goals – in my fantasy team. No longer though. Doh.

I admire Roberto Martinez for moulding a team that tries to play attractive football; most lower-table Prem teams turn up to away games and park the bus behind an ultra-negative 4-5-1 formation. Not Martinez, who started with Jason Scotland and Hugo Rodallega up front at White Hart Lane – and both strikers played the full 90 minutes. Sometimes though, such tactics will leave you utterly exposed, and Wigan were cut to ribbons in midfield and at the back – their defence couldn’t cope with the pace of Aaron Lennon or the razor-sharp finishing of Defoe. It’s fair to say that Spurs might have scored 12.

However, Spurs shouldn’t be too elated, nor Wigan despondent. This was a freak result, the like of which we might not see again for another ten seasons. It doesn’t mean that Spurs are suddenly title contenders, just as it doesn’t mean Martinez should lose his job. Keep calm and carry on…