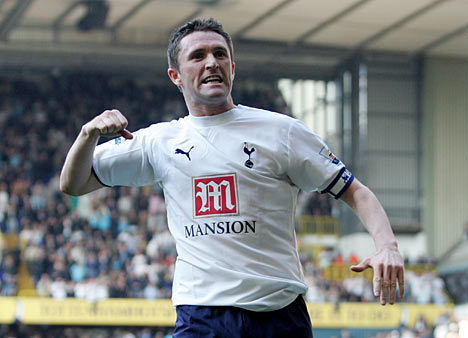 Shock and awe in today’s Sun at the behaviour of Tottenham’s players:

“TOTTENHAM’S senior players have heaped shame on the club by organising a secret Christmas party in Dublin behind the back of manager Harry Redknapp.
The Sun can today reveal SIXTEEN first-team stars coughed up £2,000 each to party organiser Robbie Keane for the wild night out after Redknapp had allowed them to go on what he believed was a golf trip.

“But the shamed players abused that privilege, with six of them even hiring a private jet to fly there and back.”

If you’re interested, the four first-team players who didn’t make the trip to Ireland for some Prem-quality ‘craic’ were Wilson Palacios, Roman Pavlyuchenko, Gareth Bale and Giovani Dos Santos.

If you remember, Arry made a big fuss recently about how he wouldn’t allow his players to have a Xmas party:

“The only advice I have about a Christmas party is don’t have one.

“I don’t see the point because they’re nothing but aggravation for everybody.

“Everyone’s waiting for you to trip up, go out and get drunk or act silly. You don’t need that.”

Here’s the thing: as long as the players don’t get blind drunk, a low-key party isn’t really going to affect their performance – footballers have a right to celebrate Christmas as much as anyone else; and loads of people work over the Xmas period, not only ballers. Whereas telling them they can’t have one is a sure-fire way to incite rebellion and dent morale.