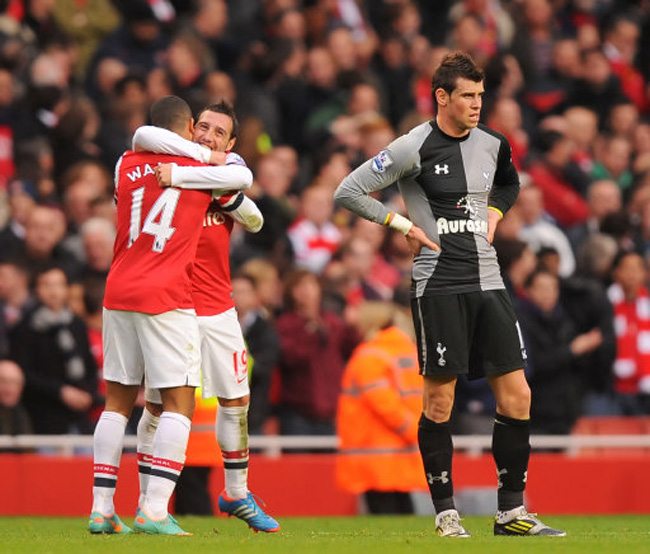 True to form, the latest edition of the north London derby produced another truck-load of goals, with Arsenal coming out on top after an ex-Gunner gave them a helping hand.

Spurs started the stronger and were a goal up against a nervy Arsenal on 10 minutes, when former Arsenal star Emmanuel Adebayor, a regular scorer in north London derbies, prodded home after Wojciech Szczesny could only parry a Jermain Defoe shot. However, with the home side looking vulnerable, Adebayor then shot himself and Spurs in the foot when he went in stupidly high and dangerous on Santi Cazorla. Howard Webb had little choice to send the big African off, and from that moment, the game changed utterly.

On 24 minutes, the equaliser finally came, when Per Mertesacker nodded home a Theo Walcott cross. Lukas Podolski and then Olivier Giroud made it 3-1 before the break as the Gunners ran riot.

After the break, Podolski set up Cazorla for Arsenal’s fourth before Gareth Bale scored a fine right-footed effort on 71 minutes to at least inject a bit of  tension into the proceedings. But at the death, the impressive Walcott made it 5-2 in a game Arsene Wenger and co. desperately needed. As for Andre Villas-Boas, he’ll be left wondering what could have been if Adebayor had kept his head.