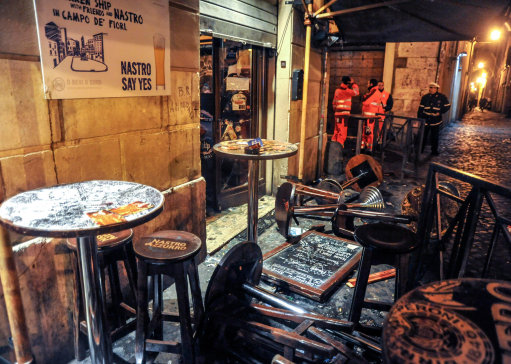 Tables and stools are overturned outside The Drunken Ship pub in Rome (Image: AP/Angelo Carconi)

Awful news reaching us this morning that a large group of Tottenham fans were injured last night when a group of around 100 ‘Lazio Ultras’ attacked them in a bar in Rome ahead of tonight’s Europa League fixture between the two sides.

Obviously there’s no way of actually knowing those responsible were Lazio fans, despite it being widely reported as such – though it is yet to be confirmed. It’s not like the Lazio Ultras don’t have previous though.

The BBC are reporting that ten Spurs fans were targeted, with one suffering a ‘serious injury’ to his aorta which has left him critically ill in hospital.

The hooligans, who were apparently armed with knives, baseball bats, knuckle dusters and iron bars, stormed the Drunken Ship bar in Rome’s Campo de Fiori district in the early hours of Thursday morning, with Italian newspaper La Repubblica describing the scenes as ‘urban warfare’ as the masked men ransacked the pub and left ten fans wounded with one fighting for his life.

The Guardian are carrying a shocking photo of the police investigators stood on the street outside the Drunken Ship after the attack. Consider this your warning, it’s not pretty.