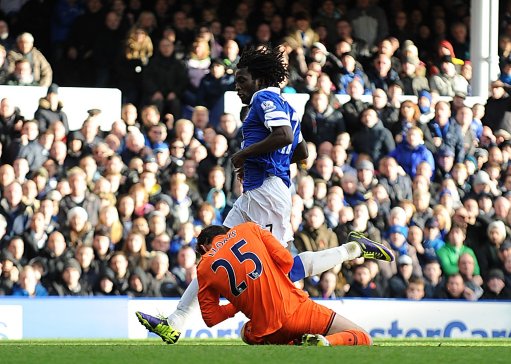 Tottenham have been branded “irresponsible” by a prominent brain injury charity after allowing ‘keeper Hugo Lloris to play for the last 20 or so minutes of yesterday’s goalless draw against Everton despite having been knocked out cold during a nasty collision with Romelu Lukaku’s galloping knee.

Lloris was clearly unconscious for a moment or three after the hideous-looking knock in the 78th minute and was, again, clearly wobbling around on spaghetti legs as play was halted for a further ten minutes while the French ‘keeper was given the once-over by the Spurs medical team. After convincing the medics he was okay to play on, Lloris returned to his station and saw out the rest of the game despite clearly being worse for wear.

It’s impossible for us to watch that without our thoughts immediately turning to the Petr Cech/Stephen Hunt incident. The manner in which Lloris’ neck snaps on contact with Lukaku’s knee is truly gruesome.

Indeed, after the game, AVB even admitted that Lloris couldn’t remember being hit by a Belgian tank, telling reporters: “Hugo still doesn’t remember the incident with Lukaku so he lost consciousness there, but he seemed assertive and determined to continue and showed great character and personality. We decided to keep him on based on that.”

However, Headway (a charity specialising in assisting victims of severe brain trauma) were quick to openly condemn Spurs after the game, criticising the club’s “irresponsible and cavalier attitude” to Lloris’ health – which is hard to argue with really. Lloris should’ve been taken straight off, no questions asked; never mind if he thinks he’s able to carry on or not.

“When a player – or any individual – suffers a blow to the head that is severe enough for them to lose consciousness, it is vital they urgently seek appropriate medical attention.

“A physio or doctor treating a player on the pitch simply cannot accurately gauge the severity of the damage caused to the player’s brain in such a setting as there may be delayed presentation of symptoms.

“By continuing to play, the player may have caused greater damage to his brain. He should have been removed from the game immediately and taken to hospital for thorough tests and observation.

“Sports science has evolved significantly over the past decade and yet we’re still faced with the antiquated concept that a player should be brave and try to continue at all costs.

“Mr Villas-Boas’s comment that his player’s determination to play on was proof of his ‘great character and personality’ is simply wrong and dangerous.”

And who are we to argue with the experts?