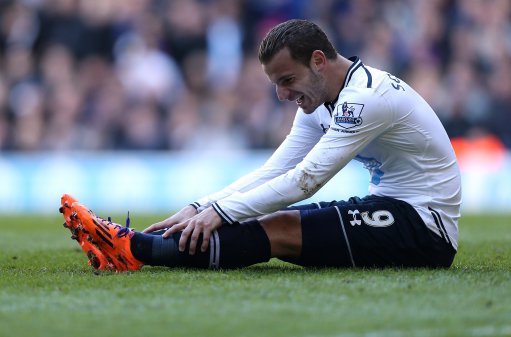 During the Man City trouncing yesterday, we joked that Roberto Soldado is so ridiculously isolated at Tottenham at the moment that we keep half-expecting him to start trying to take out his teeth with an ice-skate during games, with the Spanish striker touching the ball once during the afternoon, and that was at kick-off!

It’s strange. Spurs’ £80million midfield seem utterly incapable of even attempting to pass the ball into his feet (let alone pinging a cross into the box) and he seems utterly unable to communicate with his team-mates and work himself any chances – no wonder Spurs in their entirety are currently fourth in the Premier League top-goalscorers list, sandwiched in between Luis Suarez and Loic Remy on a measly nine goals.

Anyway, this video is doing the rounds today (we dare say it is the work of Arsenal fans) in which Soldado openly discusses the mediocrity he’s surrounded by at White Hart Lane and, even though it’s supposed to be a pithy, banterrific spoof, we’re guessing that it’s actually not too far from the truth…