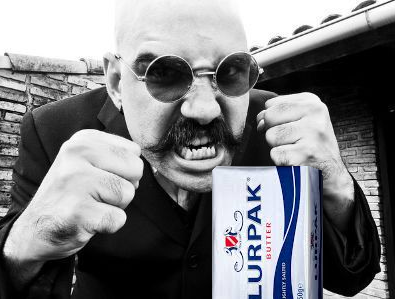 The man most widely acknowledged as Britain’s most dangerous inmate, Charles Bronson, lived up to his billing earlier this month after taking news of Arsenal’s FA Cup victory really rather badly.

Upon hearing of the result of the final at Wembley, Bronson (who is a Tottenham fan, it should be noted) admitted that he “lost it” before smearing himself in butter and attacking 12 prison wardens in the yard at Full Sutton jail in York – regaling the incident in a letter sent to his friend Kate Kray, ex-wife of Ronnie.

The letter, as published by the Daily Mirror and dated May 19th, reads:

“Not good news. I’ve had another rumble. This time with a dozen riot mob on the yard!

“Obviously I had my reasons and I’d sooner swallow teeth than my pride. Sadly I came off worst – got smashed up ribs.

“Life goes on Kate! You won’t hear me moan!

“It was sunny! A scorcher! Arsenal was playing Hull. I so wanted Hull to win, coz I’m Spurs.

“I got Lurpak and spread it on thick. Then a small cloud appeared.

“I know the mind plays games in moments of mad events but it is still a comforting thought Ron’s still around.

“Made me feel happy. Safe! Double up for it!”

For fear of violent reprisal, we ain’t sayin’ nuffink.