Taken from a BBC Sport article dating from 2004, Jose Mourinho had some choice words for the Arsenal back-four after being disgusted and appalled having sat through the Gunners’ rollicking 5-4 victory over Tottenham in the north London derby in November of that year… 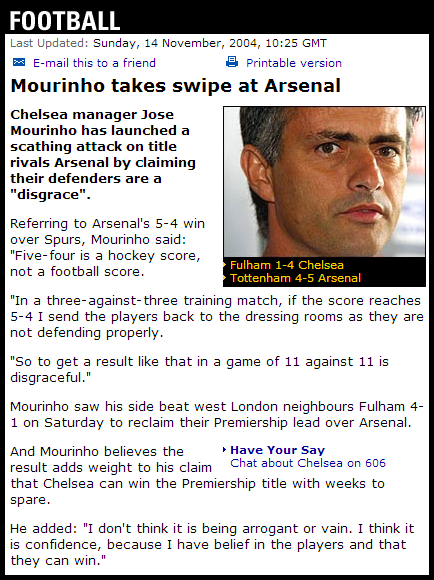 To be fair, Mou hasn’t altered his stance on high-scoring games one iota over the last decade – telling the Chelsea website after yesterday’s win:

“It’s difficult to believe on Wednesday afternoon we trained for one-and-a-half hours and we did only two things: defensive corners and defensive lateral free-kicks.

“<sarcasm>Imagine how happy I am with the result of our work!</sarcasm>

“It would have been better to give them Wednesday off and stay at home with my wife and kids!”