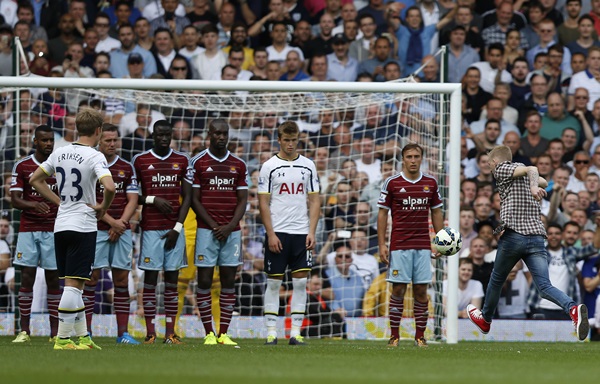 The daredevil pitch-invader who sprinted onto the pitch during West Ham’s recent Premier League tie against Tottenham has been fined for his troubles.

The fan in question, 22-year-old Jordan Dunn, appeared at Thames Magistrates’ Court in East London on Monday in order to answer for his heinous crimes, with his decision to invade the pitch described as a “drunken moment of madness”.

The court also heard that Dunn had told the policemen who carted him off the pitch that it had been his “lifelong dream” to run onto the Upton Park turf and kick a ball.

District Judge Gareth Branston duly fined Dunn a princely £305 for encroaching as he did, though did reserve praise for the West Ham supporter’s set-piece technique, saying:

“You had consumed alcohol and your stride pattern was a bit out of kilter, but to borrow a phrase you did “bend it like Beckham”.

“Regrettably it was about 30mph slower than Beckham.

“I understand that the professional footballer (Spurs’ Christian Eriksen) who followed you did not do any better.

“It was a small mercy you decided to remain fully clothed.”

According to the BBC, Dunn the apologised and then admitted a charge under Section 4 of the Football Offences Act 1991, which says it is an offence to go on to the playing area without lawful authority or excuse.

Not a bad anecdote to have up your sleeve at parties!