As you’ve no doubt already heard, the sad news filtering through this morning is that legendary ex-Hearts, Tottenham and Derby midfielder Dave Mackay passed away at the age of 80.

He once said he only ever dreamed of playing for Hearts (the club he supported as a boy) and Scotland, though he realised both dreams by 1957 (at the age of 23) – winning every domestic honour there was to win with his hometown club before moving south to join Spurs in 1959.

There he went on to captain the side through the 1960’s, winning the FA Cup not once, not twice, but thrice in 1961, ’62 and ’67 – the first of which coming as part of a league-cup double, the first time such a feat had been achieved since the Second World War.

He later joined Derby after being coaxed into signing by Brian Clough and Peter Taylor, where he was voted FWA Footballer of the Year in 1968.

After a brief spell at Swindon Town (where he adapted to play as a sweeper) at the tail-end of his playing days, a career in management followed with Mackay returning to Derby and duly guiding them to the First Division league title in 1974/75.

Speaking volumes of the stead in which he will always be held in the game, Mackay was then also made the inaugural inductee into the English Football Hall of Fame in 2002.

Here he is in his pomp.

Dave Mackay poses for a photo at White Hart Lane, 1960

Dave Mackay (back row, far right) and the rest of the Spurs team proudly display their silverware haul after winning the double, August 1961

Dave Mackay is lifted into an ambulance at White Hart Lane after breaking his leg after only 20 minutes of a reserve match against Shrewsbury Town, September 1964.

The match was Mackay’s comeback appearance, after suffering a double fracture of the same leg in a match the previous December. 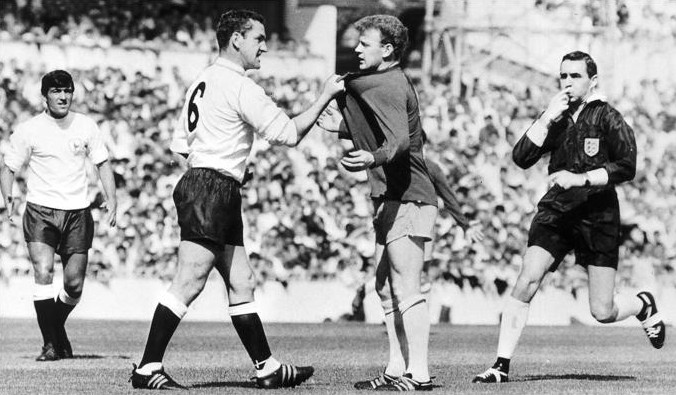 Dave Mackay limbers up during a training session at White Hart Lane, 1967

Jubilant Tottenham captain Dave Mackay displays the FA Cup trophy to a huge crowd of Spurs fans from an open top bus en route to a civic reception at Tottenham Town Hall after they had beaten Chelsea 2-1 in the FA Cup Final, May 1967

Dave Mackay of Derby poses with his FWA Footballer of the Year award, April 1969

Former Tottenham captains Danny Blanchflower (left) and Dave MacKay (hark at that tie!) are introduced to the crowd before the FA Cup Final at Wembley, May 1981