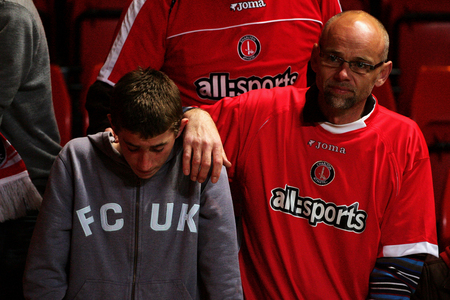 Charlton Athletic fans come to term’s with their club’s relegation. Charlton lost 2-0 at home to Spurs last night, condemning them to the drop. Tottenham’s win keeps them in the hunt for a Uefa Cup place, and also ensures the Premiership status of Fulham for at least another season. Watch highlights of the match after the clickâ€¦
[Photo: Getty Images]

Charlton vs Tottenham
Uploaded by BozWolf

Jermain Defoe, a former Charlton player, finished his old team off – but he should really have passed to Steed Malbranque, no?