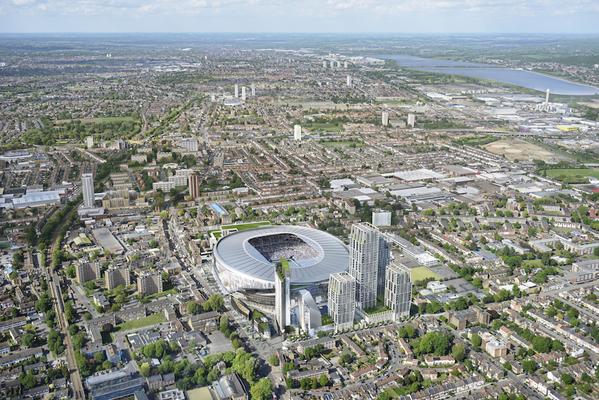 The big news coming out of Tottenham today (other than the acquisition of Toby Alderweireld, of course) is that the club have finally got their act together in terms of their long-proposed new stadium.

After hitting a few sticking points regarding the land around White Hart Lane, it would appear that Spurs are finally moving forward with the gigantic overhaul after posting an updated set of design plans on their official website.

The first announcement was that the club have struck a 10-year deal to host at least two NFL games a season once the new stadium is completed in 2018 – thus utilising the new retractable pitch, that will slide back to reveal an artificial surface underneath to be used specifically for American Football matches.

The FA currently rake in £3million per game for letting the NFL stage matches at Wembley. It’s definitely a money-spinner, put it that way.

The new WHL designs include a ‘Sky Walk’ – an “adrenaline-filled experience & attraction for all ages walking on top of the stadium with spectacular views” – as well as a new building called ‘The Tottenham Experience’ which will incorporate a new visitors centre, interactive museum, cinema, megastore, ticket office, a café and an extreme sports facility with, and we quote, “the world’s tallest indoor climbing wall”.

Crucially, however, the stadium seating capacity will also be expanded with Tottenham, in a classic bit of schoolboy tit-for-tat, announcing that they are planning to expand their capacity to 61,000 – that’s 568 more seats than Arsenal have at The Emirates – thus making Spurs ‘the biggest club in London‘.