League leaders Manchester City’s took a severe battering at White Hart Lane in Saturday’s early game, with the Citizens going down 4-1 to Tottenham. 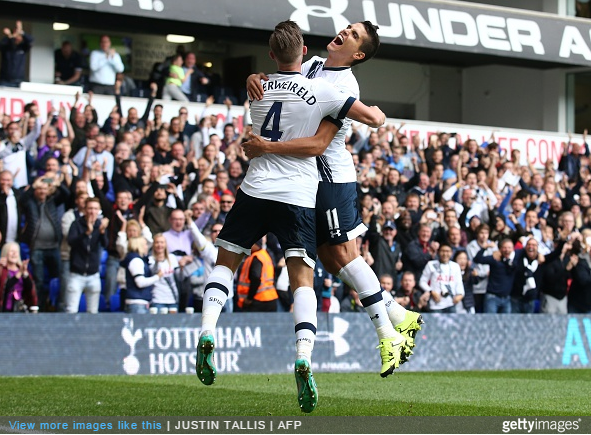 The visitors looked the more dangerous side from the start, with Sergio Aguero seeing a curling effort saved by Hugo Lloris.

City eventually opened the scoring on 25 minutes, with Yaya Touré breaking from a Spurs corner to set up Kevin De Bruyne, who fired past Lloris. Although the Belgian did look marginally offside.

Spurs upped the tempo to try to get back into the game, with Harry Kane firing wide from outside the box before Erik Lamela blasted over. Kane then saw another effort saved by Willy Caballero as the hosts pushed for the equaliser.

However, the equaliser did eventually come on half-time, with Eric Dier firing home from outside the box after a weak clearance from De Bruyne. The goal came after Caballero had made a fine close-range stop from Son Heung-Min although the whole move started after a cross from a clearly offside Lamela.

In the second-half, City saw Touré forced off with a hamstring injury, replaced by Jesus Navas.

On 60 minutes, the Lilywhites went 3-1 up, with Kane finally ending his 12 hour+ goal drought. The goal came after Christian Eriksen’s free-kick had come back off the woodwork, leaving Kane to fire into an empty net. Although once again, there was more than a hint of offside about the goal.

Sub Navas then forced Lloris into a fine save before Raheem Sterling failed to make the most of a good chance.

Spurs thought they had a fourth, when Son tapped in from close-range, only for the officials to finally flag for offside.

However, number four did come, when Erik Lamela bamboozled Caballero after a good pass from sub Clinton N’Jie.

Manuel Pellegrini sent on youngster Patrick Roberts late on (for Aguero) but ultimately the league-leaders would lose the game in quite emphatic fashion. While Mauricio Pochettino’s side can revel in a fine (and deserved) victory, Pellegrini and co. will be concerned by a second Premier League defeat in a row.