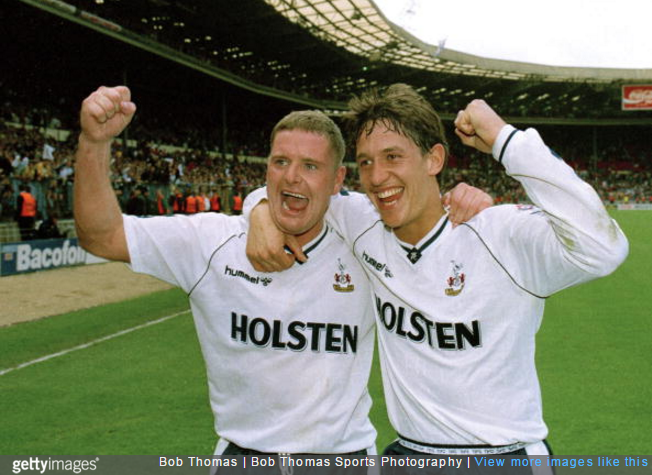 In probably one of the most important, unexpected, high-profile and – for Tottenham fans – immensely satisfying derbies of all time, Spurs delivered a swashbuckling performance after finding themselves drawn against their auld North London rivals in the semi-finals of the 1990/91 FA Cup.

The decision was made to break with tradition and play the game at Wembley – previously reserved for the final.

It was a controversial decision at the time, but the sheer demand for tickets, let alone the daftness of making both sets of fans travel hundreds of miles north to Villa Park or Old Trafford made it inevitable.

Arsenal were flying, chasing a league and cup double. Spurs were in trouble, financially stricken and being torn apart from the inside by an untimely bout of boardroom strife.

As such, Terry Venables’ team were powered to the semi-finals by the almost superhuman efforts of one extraordinary player – Paul John Gascoigne.

Gascoigne was recovering from a hernia operation and had been earmarked at 50/50 to play. He made it and, five minutes into the game, stepped up to take a free kick 35 yards out.

“Is Gascoigne going to have a crack?” he pondered, just before the maestro arched a stunning free kick beyond the hands of a despairing David Seaman.

“He is you know!” hooted Davies.

Five minutes later, Spurs were 2-0 up after an intricate passing move on the edge of Arsenal’s box led to a Gary Lineker goal.

Just before half time, Lee Dixon headed home to haul the Gunners back into the match.

However, 10 minutes from time with Tottenham repeatedly surging forward against a tiring Arsenal back line, Lineker shot and Seaman fumbled – it was 3-1 and Spurs were in the final.

And what a final it was!