Tottenham produced a superb, dynamic performance at the Emirates on Sunday, but had to settle for a draw after a late Kieran Gibbs goal cancelled out Harry Kane’s first-half strike. 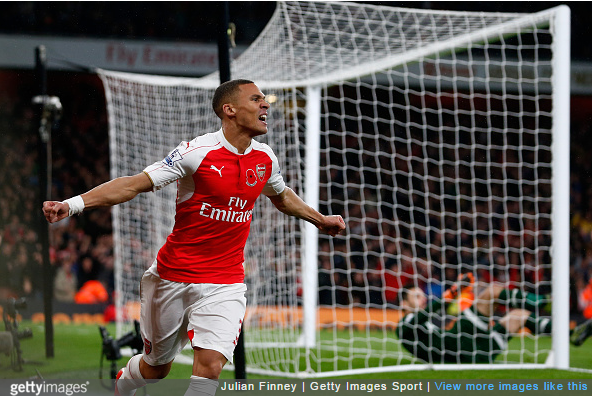 Mauricio Pochettino’s side pressed Arsenal from the start, with Mousa Dembele and Dele Alli dominating Francis Coquelin and Santi Cazorla in the middle of the pitch.

The Gunners rarely threatened in attack and the visitors eventually took the lead  on the half-hour markwhen Laurent Koscielny’s attempt to play Kane offside failed miserably, leaving the England man to coolly finish past Petr Cech.

Late in the half, both Alexis Sanchez and Olivier Giroud threatened the Spurs goal but the visitors were well worth their one-goal lead at the break.

Arsene Wenger sent on Mathieu Flamini for Cazorla at half-time, with the Spaniard apparently ill, which went some way to explaining his poor showing in the first 45.

In the second period, Giroud had two great chances to get the Gunners back on level terms, with the French international failing to head home from close-range on both occasions (hitting the woodwork once).

Tottenham continued to trouble their hosts on the break, with Kane and Eriksen both going close.

Petr Cech also proved his worth for the Gunners once again, saving superbly from a Toby Alderweireld header.

The equaliser eventually came on 77 minutes, with Mesut Ozil producing yet another superb assist, with his pinpoint pass finding sub Gibbs who fired past Hugo Lloris. Although the French glovesman probably should’ve done better.

That assist saw German wizard Ozil became the first player in Premier League history to set up a goal in six consecutive appearances in the same season while he’s also the first player to notch assists in his first 11 games of a PL campaign. Which is rather impressive!

Both sides still had chances to win the game but ultimately this fine north London derby would end all-square, with Wenger and co. surely the happier with their hard-earned point.

Arsenal go back level on points at the top with Man City while Spurs are just five points behind.