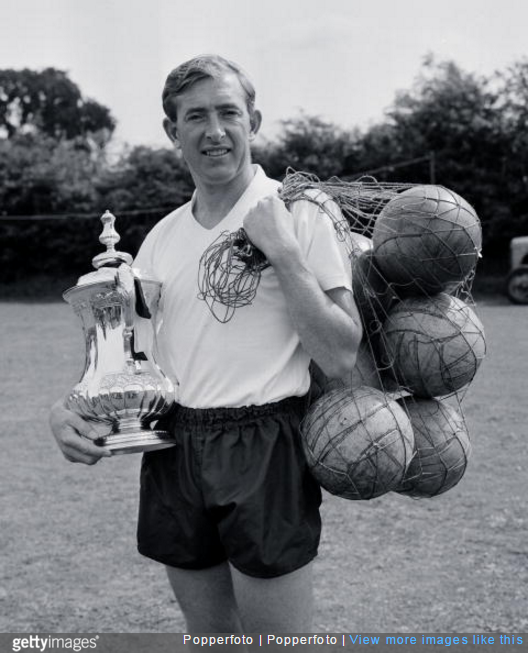 When the FA Cup-winning Tottenham side led by Danny Blanchflower (above) were drawn against Glasgow Rangers in the Cup-Winners Cup, it created a huge ripple of excitement.

Spurs were being tipped to succeed in Europe where no British team had succeeded before, but this domestic-ish battle caught the imagination and represented a stern test.

The first leg in October had attracted a crowd of 58,859 who were treated to a game described by Desmond Hackett of the Daily Express as played “in a moving spirit of nobility and pride” amidst “a whirlpool of noise” at White Hart Lane.

Spurs won the game 5-2 but the majority of the 80,000 fans who turned up for the second leg at Ibrox (a week later than first scheduled after the first game was called off due to heavy fog) expected Rangers to haul their adversaries back.

But after just eight minutes, Tottenham’s Jimmy Greaves scored after outpacing the Rangers defence and firing home what the Daily Mirror’s Ken Jones succinctly described as “a brilliant right-foot goal”.

Rangers equalised just after half time, Spurs scored again, Rangers equalised again. The score was level at 2-2 going into the final 10 minutes. It was a titanic struggle played out under the floodlights but Spurs retained the edge. Then, just a couple of minutes from time, striker Bobby Smith snatched the winner for Rangers on the night.

Spurs ran out 8-4 winners on aggregate and the English side’s man of the match over the two ties was John White, a Scotsman by trade.

The Lilywhites went on to win the competition with a thrilling 5-2 victory over Atletico Madrid in Rotterdam in final, thus becoming the first British side to win a major European trophy.

Pathé news clips of the first and second legs of the ‘Battle of Britain’ can be seen below….