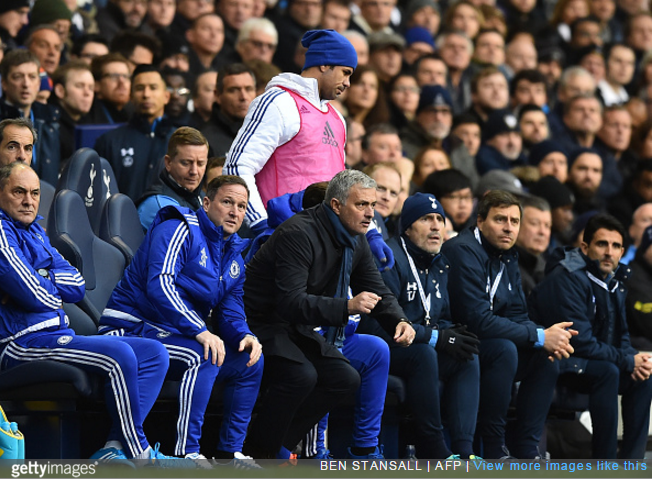 Diego Costa was forced to watch the entirety of Chelsea’s goalless draw against Tottenham from the bench today after Jose Mourinho decided to not to call upon his woefully out-of-form striker at any stage during the match.

The snub didn’t go down well with our Diego, who threw a minor wobbly after realising he wasn’t going to be coming on and huffily lobbed his pink bib in the general direction of Mourinho, sat a couple of rows in front…

Diego Costa threw the bib at Jose today for not playing vs Spurs https://t.co/W5UfwcBBuK

This of course coming just a few days after Mourinho and Costa were seen yapping at each other during the first half of Chelsea’s 4-0 tonking of Maccabi Tel Aviv in the Champions League midweek.

We’re not surprised Mourinho opted for a striker-less formation (Eden Hazard was deployed as a ‘false 9’) against Spurs.

The long and short of it is that Costa deserves to be dropped. In fact, it’s long, long overdue. He’s done nothing but plod around aimlessly up front for months, providing minimal goal threat and basically cluttering up the place with his sluggish movement and mard-arse body language.

No doubt this latest minor strop will be spun as a positive thing by Mourinho – it shows Costa has the fire in his belly, etc, etc – but what we’re actually seeing equates to little more than an adolescent tantrum: a mopey, petulant man-child not getting his way.

Mourinho on Diego Costa throwing bib: “If he wants to hurt me, it’s not with a bib”. Adds that Costa’s “mood is positive”. #cfc

If we were manning things at Chelsea, we’d seriously look at getting shot of Costa at the first available opportunity. He’s run his course. A mediocre striker who masks his lack of decisiveness and proficiency with gamesmanship and antagonism. The tactics of the inferior.

Even if no January acquisitions are made, they could do worse than going all in on Loic Remy as their first choice frontman (perhaps with a recalled Patrick Bamford as back-up).

At least Remy looks like he knows what he’s supposed to be doing up there.