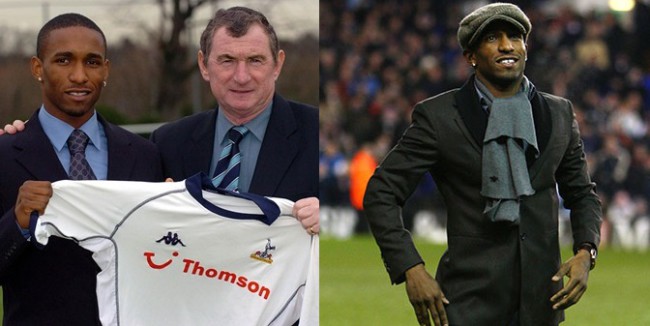 For a while, Tottenham resembled a revolving player exchange rather than a football club, with players passing through the club faster than a high-fibre breakfast.

Chuck  Harry Redknapp into the mix and a never-ending precession of eyebrow-raising cut price deals is a nigh-on certainty.

Redknapp first signed Defoe for West Ham in 1999 when the prodigious young striker was offered his first professional papers at the age of 16.

However, less than 24 hours after the Hammers were relegated from the Premier League at the end of the 2002/03 season, Defoe submitted a transfer request in order to push through a quick exit.

It was almost instantly rejected, and Defoe apologised for his conduct. But a refusal to sign a new contract coupled with a fairly lousy start to the 2003/04 season convinced West Ham to let their man go in January, and it was Spurs who came calling.

Defoe enjoyed a successful four-year stint at White Hart Lane, scoring 64 goals in 177 appearances, before falling out of favour under Juande Ramos and being flogged to Portsmouth in January 2008, who were managed by – you guessed it – our old friend ‘Arry.

Then, slightly less than 12 months later, Defoe was re-signed by Tottenham for £3million more than they sold him for – Redknapp closing the deal only three months after ditching Pompey to take the Spurs job. Are you keeping up?

Anyway, for all the bewildering comings and goings, Defoe proved a definite success on his second coming at Spurs, staying five seasons and becoming the club’s fifth highest ever goalscorer in the process.