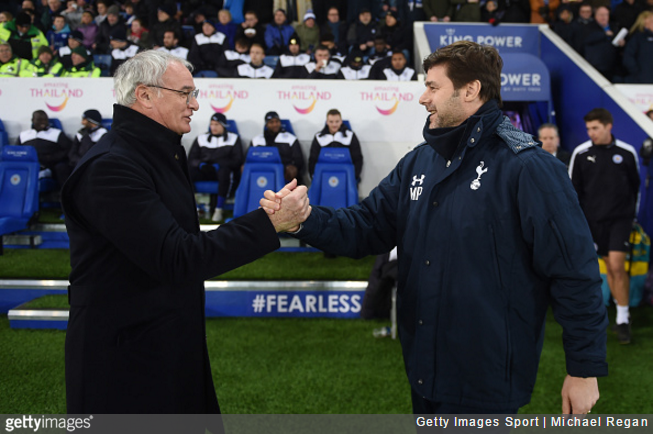 There could be few more romantic stories in football than an economically-run team coming from nowhere to win a first league title in 55 years by utilising a core group of home-grown players in a team led by a manager who has coached, rather than bought, his way to success.

Unless, perhaps, it is the story of a plucky little team that has never won a single top-flight title in its entire history coming from nowhere, utilising an unlikely rag-bag of bargain buys, lesser lights and cast-offs led by an affable manager previously deemed a complete flunk in English football.

Unfortunately for fans of Tottenham, that latter story is eclipsing their own incredible achievements at the moment. It’s the slightly more fantastical Leicester City fable that is catching the eye, and the heart, of the hoi polloi.

As is often the case, the narrative being trotted out is not entirely accurate. Leicester are not a small club, far from it. They are owned by the King Power Group, a multi-national, multi-billion dollar retail conglomerate, and managed by a man who has consistently worked at the top level of football throughout Europe for decades.

The Foxes’ brand of football, while positive, ambitious and forwardly aggressive, also relies on soaking up pressure for long periods and then counter-attacking as and when, with  a fair bit of grinding and gamesmanship thrown in too. It was their niggling tactics that, arguably, cost them dearly against Arsenal at The Emirates not so very long ago.

That is not to take anything away from Leicester’s success this season. The team is top of the table on merit and nothing else. That’s the way football works: you earn the points, you take your place in the ranking.

It’s also refreshing to see a team reaping the benefits of adopting a fearless, nigh-on naive approach – a welcome antidote to the cynical, safety first percentage game favoured by many of the so-called big boys.

On the pitch, there are many similarities between Leicester and Tottenham. Both have tight, well-drilled defences and potent attacks – although Spurs currently have the best of both and Leicester are fourth, behind Manchester United and Arsenal, in the stingiest defence stakes. And both teams value possession, despite very different approaches to it. Spurs enjoy far more of the ball in every game, while Leicester place great emphasis on using the ball effectively when in possession. This would suggest Spurs are overly patient and ponderous while Leicester are direct, long-ball merchants. But neither description is true because bot teams have been much easier on the the than either of those descriptions credits.

Pleasingly, both squads are, as collectives unified by a charismatic coach, more than the sum of their component parts.

Football is a team game, after all.

Describing Leicester’s progress as a ‘fairytale’ underestimates the true weight of their achievement. In fact, it’s just a little bit patronising. They’ve scrapped tooth and nail for everything so far. Nothing should be written off as a freakish anomaly.

It also detracts from what both the Foxes and Spurs have done for English football this season, upsetting the established order and sparking renewed interest and faith in the competitive nature of a top-flight division that had become incredibly stale and predictable over the past few seasons.

Finally somebody had the gumption to stir up the paint pot, turning it from dowdy beige to a brilliant white again.

For Spurs, too, there remains a conundrum. At the start of the season, few if any would have imagined the team would be in second place with six games to go.

Yet for a significant proportion, what should be unfettered joy at being second and in contention is tempered by the fact that it’s Leicester City, and not the likes of Manchester City or Chelsea, whose tail-ends they’re being forced to chase.

Ironically, that discomfort is rooted in the Premier League status quo that they’re helping to usurp – calling into question just who are the big teams and who are the small fry these days.

So, as the season nears its climax, fans of Leicester and Spurs are left to gnaw away at what remains of their cuticles while the rest of us simply salute their respective teams for the previously unthinkable feat one of them is set to pull off.