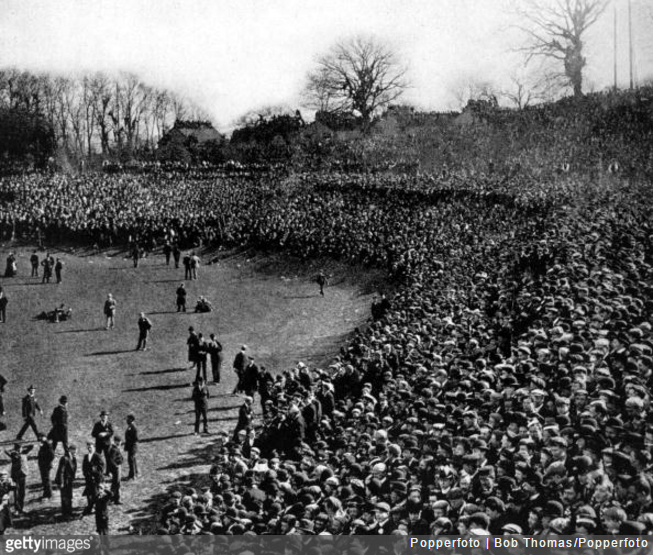 On 20th April 1901, the biggest crowd ever to attend a football match anywhere in the world descended on Crystal Palace Park in South East London.

The occasion was the FA Cup Final and what enticed the official attendance of 114,815 – many more gained entrance unofficially – was not just the culmination of a competition already established as the world’s foremost football tournament, but what the two competing sides represented.

The teams in question were Tottenham Hotspur and Sheffield United. Spurs were a non-league side, playing in the amateur Southern League. The Blades were an established football power from the professional Football League.

Underdogs versus giants. Amateur versus professional. The industrial north versus the suburban south. This was a final that really caught the public’s imagination.

It was a momentous day. Spurs would eventually win after a replay, becoming the first and remaining only non-league team to win the FA Cup.

However, the first tie in front of the immense throng at the Crystal Palace ground is also notable for featuring the first moving picture refereeing controversy.

Film was a new technology at the time, and emerging newsreel companies scoured the land in search of events to film and broadcast at local cinemas. The cameras were at the Crystal Palace that day, and were fortunate enough to witness referee Arthur Kingscott dropping a clanger.

Tottenham’s goalkeeper George Clawley fumbled a cross just wide of the goalpost, but Kingscott ruled it had gone in. There were no nets in those days so the decision stood, and the game was drawn 2-2.

The sense of injustice at what was popularly dubbed “the goal that never was” helped – if you’ll excuse the pun – spur support for the London side, who won the replay at Burnden Park in Bolton by three goals to one.

That game was watched by just 30,000 after rail companies refused to lay on cheap trains. Some things never change.

To get some idea of the size of the crowd that packed into the aforementioned first tie, here’s a list of the food laid on by the caterers that day…

Sure beats the overpriced (and barely edible) pie-and-a-pint combo on sale at modern finals.