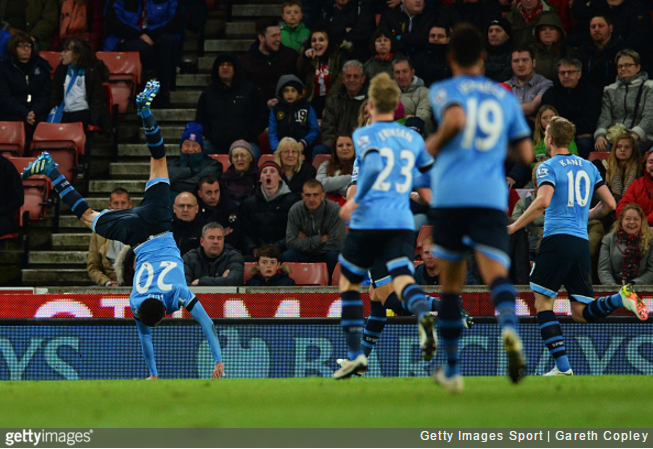 Tottenham kept the squeeze on Leicester at the top of the Premier League with an important win over Stoke City in the Monday night match.

Spurs hit their opponents with wave after wave of fast, fluid counter-attacks as Stoke’s defences eventually disintegrated under the strain.

Spurs whittled the Foxes’ lead back down to five points with an effervescent 4-0 romp at the Britannia – the fun beginning in the 9th minute when Harry Kane tucked away an absolute pearler from the corner of the box to open the scoring.

The next goal was a while coming, with Dele Alli breaking through enemy lines to prod the ball over Shay Given and double Spurs’ lead with 67 minutes on the clock…

Minutes later, Alli fluffed a sitter in almost identical circumstances, rounding Given only to clank his misdirected shot off the upright.

Alas, it all proved too much to take for Mauricio Pochettino, who fell to his knees in Platoon-like anguish…

Mercifully, it wasn’t long until Spurs grabbed their third; Alli, Lamela and Kane combining to formally present the striker with his 24th league goal of the season on a silver platter…

Having put his shonked horror miss behind him, Alli then rounded off the scoring in the last 10 minutes by chopping home what Jamie Carragher later referred to as a delightful “Hoddle-esque” volley…

A few pertinent stats to fling at you courtesy of Opta: Harry Kane has now scored one more Premier League goal (24) than Aston Villa have managed as an entire collective this season.

Elsewhere, Dele Alli became the youngest midfielder to score more than 10 goals in a single season since the Premier League began in 1992. He also know has three more Premier League goals than Jack Wilshere, and that’s in 82 fewer games.

After the Stoke rout, Spurs as a whole are now ranked first in goals scored, goals scored from set-pieces, chances created and amount of shots on target in the entire league. They also rank lowest when it comes to goals conceded and shots on target conceded.