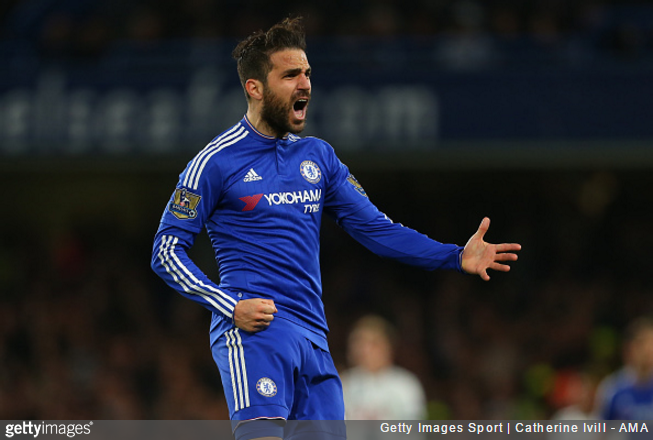 Not that it’ll come as a major surprise to anybody who actually watched the match, but Cesc Fabregas has been accused of instigating the hostility that pervaded the 2-2 draw between Chelsea and Tottenham that handed the title to Leicester City on Monday night.

The tempestuous game was flecked with various moments of ill-discipline. Spurs had nine players booked, a Premier League record for which they have received an automatic fine. Elsewhere, Mousa Dembele is now facing a potential 10-game ban for attempting to gouge at the eyes of Diego Costa.

In short, it was a bit of a shit-storm that saw not one but two mass scuffles break out at separate junctures – including one that knocked Chelsea boss Guus Hiddink on his backside after the final whistle.

However, as per correspondent Matt Law’s write-up in the Telegraph today, Fabregas was the protagonist-in-chief to blame for sparking the brawls after the Blues midfielder “slapped the groins” of both Spurs players and staff.

Eyewitnesses of the bust-up that erupted at the final whistle of the 2-2 draw that handed the Premier League title to Leicester City claim Fabregas was the main instigator.

The Spaniard is alleged to have slapped more than one Tottenham player and member of staff in the groin area, sparking a number of verbal and physical reactions.

Hiddink revealed afterwards that he got hold of Fabregas because the midfielder was shouting “threatening” words in Spanish that would have been understood by the majority of the Tottenham management staff and Erik Lamela, who had trod on the hand of the former Barcelona man.

What a strange creature Cesc truly is.

So intelligent and personable away from the pitch and so prone to being an absolute underhanded rotter on it.