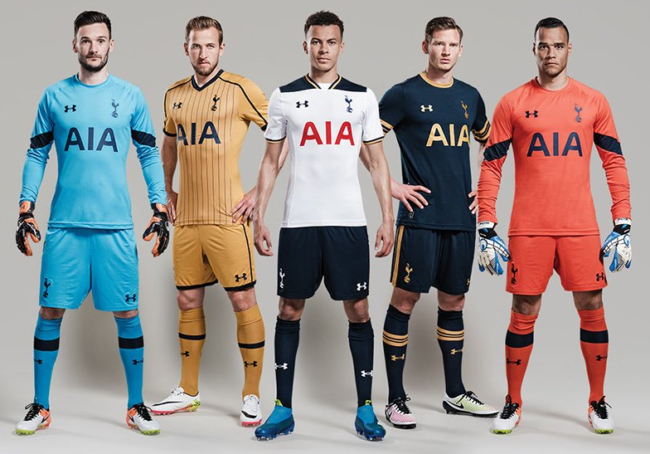 A new kit launch always prompts fierce debate, and this week’s launch of the new Tottenham kits was no different. Initial reaction was that the navy second kit was the best of the bunch, with the yellowy/gold-ish third shirt attracting flak.

One of the kinder observations was that it would make the players look like giant Caramac bars, while one Twitterwag wondered whether the 10 stripes represented the number of hours it takes to get served a half-time pint at White Hart Lane.

All of which seems to provide an opportune moment to revisit six classic Spurs kits from the past.

Ron Henry and Les Allen (Clive and Paul’s dad) show off the classic 1961 shirt here, a favourite not just because it was the shirt worn by the double-winning team, but because it’s simple, plain white and the stylised cockerel is enduringly popular.

This little beauty, on the other hand, was far from plain and simple. This shirt, worn in 1985, featured so many chevrons and stripes it looked like a collision in a road sign factory.

It was also once worn by Diego Maradona (for Ossie Ardiles’ testimonial in 1986), which pretty much makes it instantly cool by association.

The away kit worn in the early 1990s took the random lines and patterns aesthetic to new heights, and is still known affectionately as the ‘birdshit-on-the-shoulder shirt’.

It was strangely popular, despite Teddy’s obvious reservations.

Of all the more modern kits, this offering from 2011 met with most approval, a nod back to the classic white, unmucked-about-with first team shirt that is ‘proper Tottenham’.

Worn for just one game, the 125th anniversary match against Aston Villa in 2007, this special edition shirt harked back to the 1880s when the club opted to change its all blue shirt to blue and white halves in honour of the all-conquering Blackburn Rovers side of the time.

For many Spurs fans, this is the classic shirt, worn here by Martin Chivers and Alan Mullery who are flanking manager Bill Nicholson.

Plain white, round colour, and a simple, classic cockerel on a ball.

It’s this writer’s favourite, and that’s why I’m not the shirt manufacturer’s target market.