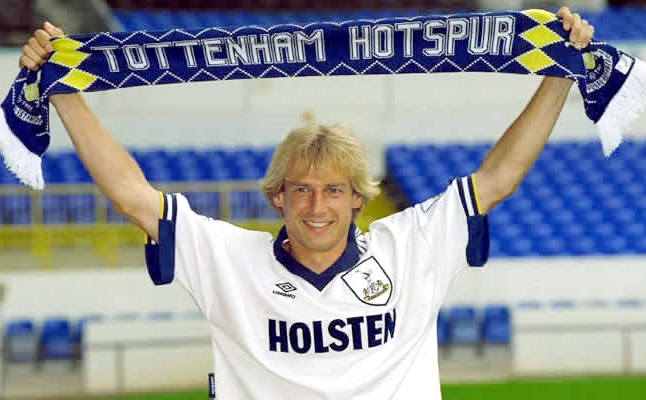 When Jurgen Klinsmann signed for Tottenham 22 years ago today, it was a genuinely jaw-dropping moment.

With the Premier League still in its infancy, top tier signings were not yet two-a-penny, and Klinsmann was arguably the hottest property in world football – a genuine superstar.

What’s more, Spurs were reeling from the imposition of a 12-point deduction and a ban from the FA Cup, imposed after the football authorities found the club guilty of making irregular payments to players back in the 1980s.

The signing, clinched by club chairman Alan Sugar aboard his yacht in Monaco (of course it was!), was not only a massive coup for the club, it was also a statement of intent from Sugar, who was fighting against the punishment levelled by the FA.

Klinsmann went on to play just 68 times for the north London club, but established himself as a true legend in meantime.

Klinsmann arrived at Spurs with a reputation as one of the worst divers in football, so he confronted that head on.

At his first press conference he asked: “Are there any good diving schools in London?” and on his debut for Spurs against Sheffield Wednesday at Hillsborough in a 4-3 thriller, he celebrated his first goal for the club by running towards the travelling fans and launching himself into a full-length, arms-out swan dive onto the turf. 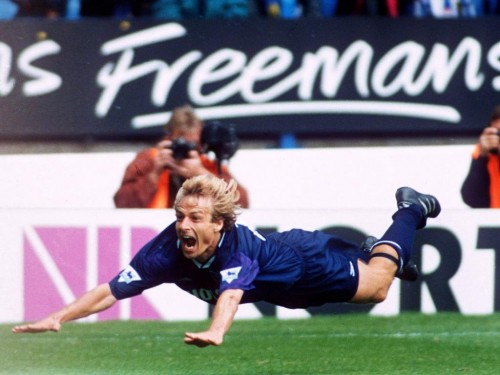 Subtle, it was not!

Jurgen the German’s home debut came against Everton, and sure enough he scored – latching on to a Teddy Sheringham knockdown, he twisted to score with a stunning bicycle kick.

As the message that flashed up on the Paxton Road scoreboard had it: “Wunderbar Jurgen!”

In March 1995, Spurs went to Anfield for an FA Cup quarter final. They’d never beaten Liverpool in the FA Cup, and rarely won at Anfield. But in a superb game they ran out 2-1 winners, with victory clinched by Klinsmann’s strike 90 seconds from the end.

When the whistle went, Klinsmann milked the applause of the travelling Spurs fans who dominated the Anfield Road stand as well as receiving a standing ovation from The Kop, who stayed themselves to acknowledge the quality of what they had seen.

Although Klinsmann lit up Tottenham’s season, it all ended on a darker note. As his first campaign finished, he announced he would be leaving the club to join Bayern Munich.

He was obviously scarred by the experience, latter describing footballers as “total scum” and publicly stating his aversion to “Carlos Kick-a-ball” foreign signings, leading him to take the inspired decision to turn down Dennis Bergkamp when he wanted to sign for the club.

In 1997, Klinsmann returned to Tottenham for a short spell, with the club fighting relegation under London Underground enthusiast* Christian Gross.

It all came down to a game against Wimbledon at Selhurst Park that Spurs had to win to have a realistic chance of staying up.

They did win, 6-2, and our Jurgen helped himself to four of them thar goals.

(*Gross arrived for his first Tottenham press conference waving a Tube ticket in his hands, professing it to be his “ticket to the dreams”.)