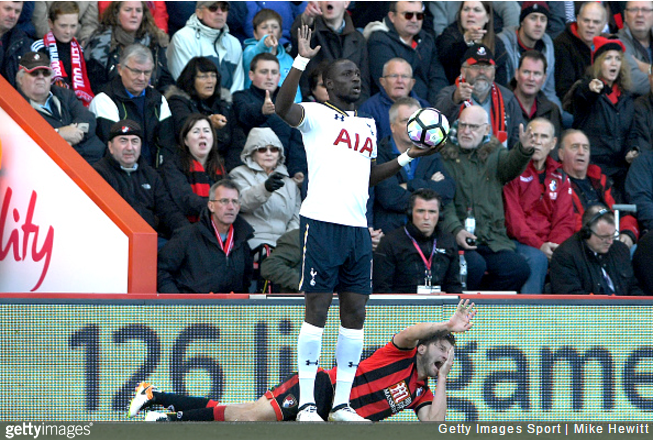 It’s fair to say that Tottenham fans are still feeling a little short-changed over summer signing Moussa Sissoko, who has yet to prove that he’s worth anywhere near the £30million the club paid for him in August.

Indeed, Sissoko has been used sparingly ever since his arrival, with his sixth appearance of the season also likely to be his last for some while.

This is because, having come on for the last 15 minutes against Bournemouth on Saturday, the French international midfielder got himself embroiled in an altercation that is likely to land him with a retrospective ban from The FA.

While tussling for the ball to take a throw-in, Sissoko chucked an entirely needless elbow into Harry Arter’s face that sent the Cherries man tumbling to the floor…

Nasty, but not deliberate… apparently.

“He said it was an accident. I’m happy to take that as gospel,” Arter told reporters after the game.

Still, Sissoko is likely to be handed a three-match ban for the elbow despite the incident going unpunished by referee Craig Pawson, who also failed to include it in his match report.

Thankfully, recent(ish) rule changes mean that The FA can scour video evidence and take retrospective action for any flare-ups not seen by the officials.

And to think, Spurs will be missing all of this in Sissoko’s absence…

Good riddance if you ask us.