Arsenal kicked off Saturday’s Premier League action with a convincing 4-1 win away to struggling Sunderland. Amongst the fans at the Stadium of Light for the game was one chap, oddly enough, in a Spurs shirt.

Not surprisingly, a photo of the bloke in question soon made it onto social media, with Arsenal’s own official Twitter account getting involved.

The fan in the Spurs top may well have been a Sunderland fan simply doing his best to annoy the opposition, but the Gunners’ social media team posted a clever Tweet after the game… 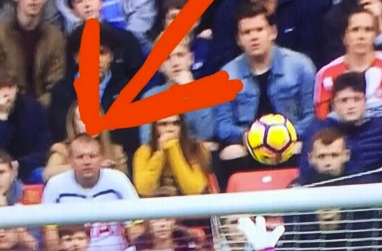 After the early Arsenal game had ended, Tottenham could only manage a draw at home to Leicester which leaves Mauricio Pochettino’s side in fourth place in the table, three points behind the Gunners.