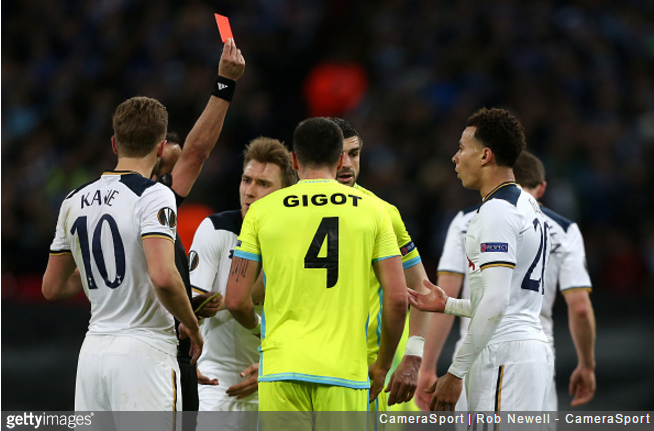 In action at Wembley against Gent in the last-32 of the Europa League, Tottenham’s night became all the more challenging in the 39th minute when they suddenly found themselves reduced to ten men.

Trailing 2-1 on aggregate at the time, Dele Alli was shown the first ever red card of his career for a despicable, petulant lunge on Brecht Dejaegere.

Upset at not being granted a freekick himself moments earlier, Alli retaliated by flying in and stamping his studs into Dejaegere’s knee – a ‘challenge’ that could’ve easily left the Belgian defender with a broken leg…

Dejaegre limped on, bloodied sock and all, and even came back on after half-time – hobbling around until the 55th minute when he finally went off to be replaced by Louis Verstraete.

Quite honestly, we were shocked to learn this is the first red of Alli’s career, given his childish penchant for nastiness under stress.

It definitely needs stamping out, if you’ll excuse the unfortunate pun.